Welcome to our NIF Newsletter. In this week’s headlines: the 76th session of the United Nations General Assembly takes place, advocates fear that the Chinese government is pressuring the United States to ease its criticism of the former’s human rights violations in order for it to cooperate on important climate change talks, and a new Human Rights Watch report details major war crimes committed against refugees during the Tigray conflict. 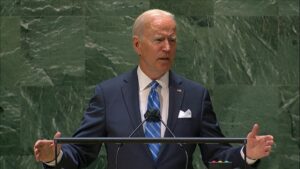 The 76th session of the United Nations General Assembly’s high-level portion is taking place this week, as world leaders and top diplomats gather to discuss a wide variety of issues including the global health pandemic, the promotion of human rights, and efforts to combat the climate crisis. On Tuesday, U.S. President Biden delivered his first address to the United Nations, expressing that the United States seeks to usher in a new era of foreign policy to help tackle the world’s most pressing modern transnational threats through a prioritization of partnerships, diplomacy, and developmental aid. He laid out the United States’ commitment to fighting climate change in particular as a bed rock of this reset in foreign relations, and stressed the need for international collaboration in order to deal with major contemporary challenges. The American president also demanded an end to the conflicts in Yemen and Ethiopia, both of which have had devastating humanitarian impacts, and pledged to defend democratic ideals against the spread of authoritarianism. Biden’s speech emphasizing the themes of global cooperation and the strengthening of alliances comes at a time of some turmoil, as officials try to quell the recent AUKUS trilateral pact crisis which has emerged between France and the respective countries of Australia, the United Kingdom, and the United States. 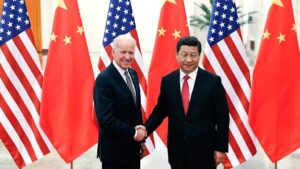 The Biden administration’s attempt to address both human rights and climate change issues is facing resistance from the Chinese government. (Photo from Getty Images)

As the Biden administration seeks to address two of its top priority issues, climate change and the defense of human rights, officials face a dilemma and advocates fear that the Chinese government is pressuring the United States to ease its criticism of the former’s human rights violations in order for it to cooperate on key climate change talks. U.S. Special Presidential Envoy for Climate John Kerry has been working to form international collaboration to combat one of the greatest threats to modern society, and a debate on how to handle China’s necessary place at the table has taken shape. While climate change deliberations move forward, many advocacy groups are concerned that the Chinese regime will use human rights as a bargaining chip. The United States and others have expressed trouble with China’s poor track record on human rights and the array of abuses they are accused of, from their treatment of Uyghurs to repressive policies in Hong Kong and Taiwan. However, due to China’s much-needed involvement in the climate negotiations, it may become more difficult to speak out against them on human rights and the Biden administration will have to try and adopt a delicate balancing act approach to achieve its desired progress on the two important fronts. 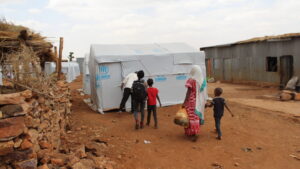 The conflict in Tigray has had a devastating impact on refugees in the region. (Photo from UNHCR)

Human Rights Watch (HRW) issued a recent report highlighting serious war crimes and abuses committed against refugees in Tigray during the ongoing conflict there. The already vulnerable segment of the population has borne the brunt of the fighting’s repercussions, and has been subjected to egregious human rights violations at the hands of both Tigrayan militias and Eritrean government forces. The new HRW findings come in the aftermath of investigations last year in 2020 which documented repeated instances in which the parties involved in the conflict entered various refugee camps, blocked critical humanitarian aid, and attacked civilians and non-combatants. Adding to the disturbing nature of the abuses is the fact that these refugee victims themselves are externally displaced citizens residing in the Tigray region who had intentionally fled and escaped violence in other areas to pursue safer lives. Therefore, advocacy groups and activists have called on belligerents to cease any hostilities towards refugees who should, on the contrary, be protected from the atrocities of the conflict.