Welcome to our NIF Newsletter. In this week’s headlines: U.S. Secretary of State Antony Blinken meets with Qatari officials in Doha for crisis talks on Afghanistan and praises the Gulf nation’s support of the evacuation operation, an American congressional delegation led by U.S. Senator Chris Murphy travels to Tunisia to urge a return to the democratic path and a swift end to the country’s state of emergency, and Human Rights Watch issues a report documenting unlawful extrajudicial executions committed by Egyptian security forces which were disguised as shootouts. 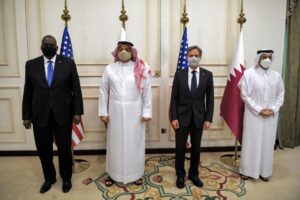 U.S. and Qatari officials met this week to discuss the ongoing humanitarian collaboration efforts in Afghanistan. (Photo from AP)

U.S. Secretary of State Blinken Meets with Qatari Officials for Talks on Afghanistan and Praises the Gulf Nation’s Support of the Evacuation Operation

United States Secretary of State Antony Blinken and other top U.S. officials met with Qatari leaders in Doha this week, as the two countries continue to coordinate humanitarian efforts in Afghanistan. The U.S. and Qatar engaged in discussions regarding the ongoing situation there, with Blinken thanking the Gulf nation for its vital role in supporting the recent evacuation operation. Qatar, as Blinken pinpointed, has been one of the most significant and instrumental contributors to the endeavor. The United States has a major airbase in Qatar which has been the gateway for over 58,000 people who have been airlifted out of Afghanistan following the Taliban takeover. Additionally, today, Qatar Airways helped evacuate approximately 200 people from Kabul to Doha on a plane which delivered emergency aid – the first international flight to leave since the U.S. pullout. All told, this week’s talks between the U.S. and Qatar signal an intent for sustained collaboration on Afghanistan in the aftermath of the United States’ official troop withdrawal, and highlight the important part that Qatar has played in working with the U.S. to alleviate the humanitarian crisis. 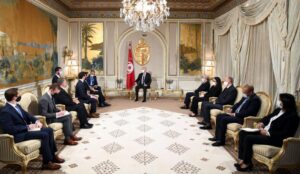 The delegation met with President Saied, members of parliament (MPs), and representatives of civil society organizations. (Photo from Tunisian Presidency)

This past weekend, a congressional delegation led by U.S. Senator Chris Murphy (D-CT) – a member of the Senate Foreign Relations Committee – met with Tunisian President Kais Saied and other officials. The talks were aimed at creating a dialogue to help correct Tunisia’s democratic path and emphasizing the importance of an inclusive political process moving forward. Recently, President Saied had suspended parliament and sacked his cabinet in a widely criticized maneuver which provoked global concern regarding a potential regression back towards autocracy in the country. Many observers viewed the action as an illegitimate and unconstitutional attempt by Saied to consolidate power and lay blame at the feet of the parliament during a time when the incumbent government was facing pressure for the economic downturn in Tunisia. As such, pro-democracy advocates voiced uneasiness over the move and reiterated the need to respect and uphold the civic process. In their meetings with Tunisian officials, the American congressional delegation encouraged them to continue to work on building a more inclusive democratic environment, while also paving the way for a peaceful path to ending the state of emergency and political crisis.

Report on Extrajudicial Executions in Egypt 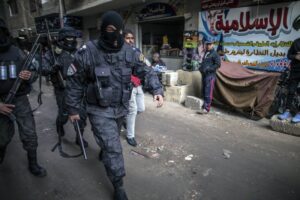 Security forces in Egypt have been accused of carrying out extrajudicial executions under the guise of terrorist shootouts. (Photo from Getty Images)

Earlier this week, Human Rights Watch (HRW) released a detailed report on systematic extrajudicial and summary executions committed by Egyptian security forces under the el-Sisi regime. In many of these, the Ministry of Interior claimed that those killed were terrorists, however, HRW’s findings contradict these assertions and show that the victims posed no immediate threat to the national security of Egypt. HRW found that there had been 755 killed under the government’s guise of 143 “terrorist shootouts,” and while regime forces put forth this contention, further investigation into the matter demonstrated that most of the individuals who disappeared were in fact summarily executed. Under international law, extrajudicial killings are illegal in both the International Covenant on Civil and Political Rights and the African Charter on Human and Peoples’ Rights – for which Egypt is a signer and a member state, respectively. In light of the report, HRW has called for targeted sanctions and the freezing of assets towards those involved, as well as a halt in arms sales to the Egyptian government due to the growing evidence of flagrant human rights violations.