Welcome to our NIF Newsletter. In this week’s headlines: Tunisia faces a political crisis after President Kais Saied ousts the country’s prime minister and suspends parliament, American and Iraqi officials meet at the White House and announce an agreement to formally conclude the U.S. military’s combat mission in Iraq by the end of the year, and the United States and China engage in tense high-level talks. 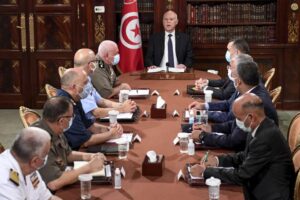 The United States and others have voiced concern over this past week’s developments in Tunisia. (Photo from AP)

Earlier this week, President Kais Saied triggered a political crisis in Tunisia following his decision to oust the country’s prime minister and freeze parliament. The move comes in the midst of protests and growing anger against the government over its handling of the coronavirus pandemic, economic stagnation, and deteriorating public services. Saied’s actions prompted celebratory rallies by some of his supporters, however many others – including pro-democracy activists – denounced them as a power grab and expressed concern with the legality of the behavior. U.S. officials under the Biden administration also voiced uneasiness, urging calm and conveying support for Tunisian efforts to move forward in line with democratic principles. The course of events that have transpired this week present a serious test for the state of democracy in Tunisia, but analysts are hopeful that the crisis will not devolve and will instead propel political opponents into dialogue with each other and result in a new compromise. 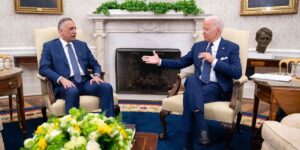 American and Iraqi Officials Meet and Announce an Agreement to Formally Conclude the U.S. Military’s Combat Mission in Iraq

President Biden hosted Iraqi Prime Minister Al-Kadhimi at the White House a few days ago where a joint announcement was made on an agreement to formally conclude the U.S. military’s combat mission in Iraq by the end of this year. Analysts point out that the move will not include a troop drawdown, but instead focus on solidifying the shift of the U.S. mission in Iraq to a purely advisory role. Many of the armed forces that are currently stationed there provide training services to the Iraqi military to aid them in their fight against ISIS, and the latest action this week would strengthen the United States’ advisory and logistics support, air power, and intelligence and surveillance capabilities. All told, the decision will redefine the roles being performed by military personnel within the region and reclassify others on paper. Observers also suspect that it will offer Prime Minister Al-Kadhimi the political cover to try and appease factions within Iraq and bolster his campaign ahead of the parliamentary elections scheduled for later this year in October. At a time when Iraq is facing multiple socioeconomic crises including major protests in the street, Al-Kadhimi likely views the agreement as a way to find a delicate balance between those who are skeptical of the United States’ continued presence and others who believe the American troops are beneficial to the prospects of stability. 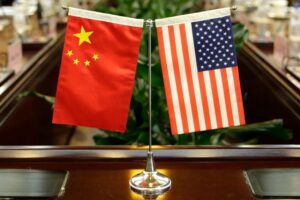 There are several major points of contention between government officials in the United States and China. (Photo from Getty Images)

The United States and China Engage in Tense High-Level Talks

During this past week, officials from the United States and China engaged in tense high-level talks which ended in a stalemate. Diplomats from the two countries discussed what each saw as the issues that need to be addressed, and the actions that they would like to see from the other. The U.S. expressed that its policy towards China is a complex one which enables it to work with them in some areas, while still confronting the ruling government on other matters as well. China, however, conveyed its dismay with this and made it clear that collaboration is an all-or-nothing proposition. This latest round of talks comes after strong condemnation of China by the U.S. for repeated cyberattacks. In addition to this, there are several major points of contention and factors behind the recent escalation in tensions. The U.S. has ramped up its criticism on serious human rights concerns within China such as the regime’s repressive behavior in Xinjiang, Hong Kong, and Taiwan, while China has focused its attention on American sanctions, visa denials, extradition requests, and company suppression, and demanded that the U.S. not interfere with what they deem to be “internal affairs.”