Welcome to our NIF Newsletter. This week, we recap Thursday’s NIF lunch discussion event regarding the one-year anniversary of the Caesar Act sanctions against the Syrian regime. Meanwhile, in our news headlines: Ebrahim Raisi’s election as next president of Iran brings along foreign policy complications for the United States and other nations, and U.S. National Security Advisor Jake Sullivan announces that the United States will apply additional sanctions on Russia over the Navalny poisoning days after President Biden and Russian counterpart Putin’s summit in Geneva.

This week, the National Interest Foundation hosted a lunch discussion event regarding the one-year anniversary of the Caesar Act sanctions against the Syrian regime. The panel of issue experts was made up of Colonel Joel Rayburn, former Special Envoy for Syria; Ayman Abdelnour, President of Syrian Christians for Peace; Erich Ferrari, Esq., Principal of Ferrari & Associates; and Shahroo Yazdani, Esq., Of-Counsel at Price Benowitz. The event was moderated by Hamdi Rifai, Executive Director at the Council of United Syrians & Americans. The panelists discussed an array of topics including the intentions of the sanctions, the legal framework behind them, and the results of the actions taken.

Colonel Rayburn offered insight into the goals of the Caesar Act sanctions, stating that the intent was for it to halt foreign investment into Syria, reduce the resources available to despot Assad, and aid in the implementation of UN Security Council Resolution 2254. Rayburn believed that the Caesar Act was highly effective, and went on to explain how the Syrian economy was negatively impacted by the Assad regime. He further detailed how the corruption, incompetence, and mismanagement that has occurred within the regime has resulted in economic failure. Col. Rayburn also highlighted former President Trump’s three main goals as it pertains to Syrian foreign policy in the aftermath of the Caesar Act sanctions, with those being to combat Daesh and other terrorist groups in the region, to push back against Iranian influence in Syria, and to attain a political resolution and stability under UN Security Council Resolution 2254.

In his remarks, Mr. Abdelnour described the conditions under which the Syrian people are living, the intentions of the Assad regime, and how it has still maintained power after the Caesar Act. He stated that the Assad regime has tried to use the sanctions to their advantage, by justifying the country’s economic woes and attempting to place blame on the United States for it. They have also continued to intentionally worsen sanctions that they have put on their own people. The regime currently controls the wealth distribution in the country through imports and exports, while preventing any foreign humanitarian organization from providing aid directly to the population. This is done so that they can steal upwards of 40% of the humanitarian aid that comes into the country. Abdelnour explained how the regime uses social engineering to oppress its citizens and maintain control. The social engineering used by the Syrian regime is a population control initiative to limit it and force out any surplus. This allows the regime to provide less resources and infrastructure while creating a cash flow from the refugees sending money back to their families in Syria. The government then taxes this money and does not have to provide the investment to guarantee a return. Finally, Mr. Abdelnour described how the Syrian nation functions as a narco-state, which makes its wealth from drug distribution and smuggling that forms a shadow economy. This shadow economy comprises 80% of the total economy, and allows the Assad regime to maintain power and wealth despite sanctions.

Mr. Ferrari outlined the legal framework of the Syria sanctions and the results that have occurred. He explained that the Caesar Act is not the only set of sanctions, and that there are others from different departments within the federal government which enable the overall sanctioning of Syria. He further delved into how it is a mix of these regulations, statutes, executive orders, and more that intertwine to try and accomplish a larger goal. Ferrari described the nature of sanctions by breaking them up into groups, with some relating to the prohibitions placed on Americans to prevent any interaction with Syria and others like derivative sanctions which ostracize individuals for engaging in support for sanctioned parties. Lastly, he discussed how the sanctions work to ensure an absence of investment into the country or a contribution of funds to illicit activities.

Ms. Yazdani discussed the results from the Caesar Act sanctions and the implication that it had for non-governmental organizations (NGOs). She believed that while it had the right intentions, the implementation was lacking and is ultimately an extremely difficult task. Yazdani outlined how there is a specific licensing policy in regard to Syrian sanctions that allows for oil-related transactions to still take place with approval. She also described how because of the Assad regime’s stranglehold over the country, NGOs did not have the incentive to invest in Syria other than for humanitarian purposes – since the corruption index was high enough that the groups could not guarantee a stable return on their investment.

Election of Ebrahim Raisi in Iran 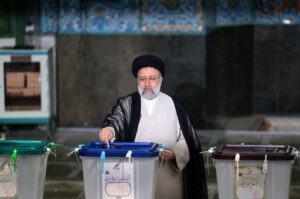 Raisi has been criticized for his history of ties to grave human rights abuses. (Photo from AFP)

The election of Ebrahim Raisi as next president of Iran has drawn concern regarding the possible foreign policy complications it will present for the United States and other nations. The hardline cleric has been sanctioned by the United States due to his lengthy record of ties to grave human rights violations, and also holds extremely conservative views and a suspicion of western nations. Raisi prevailed in an election that was seen to have eliminated any serious threats, as over 600 people attempted to get approval to run for president but were disqualified – leaving only a handful of candidates left. Of those, several dropped out of the race, further removing any potential competition to Raisi. The council that approved the candidates enabled his “victory” and the desired rightward shift of the ruling regime. Raisi is currently seen as the heir to Supreme Leader Ali Khamenei and offers the government a united front, allowing Khamenei to make decisions without objection and secure a tighter grip over the country. 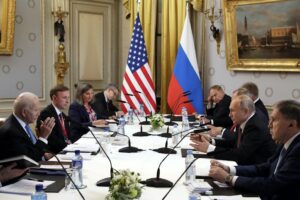 The announcement of the additional sanctions comes shortly after Biden and Putin met in Geneva last week. (Photo from Getty Images)

U.S. Announces Plans for Additional Sanctions on Russia Over the Navalny Poisoning Days After Biden and Putin’s Summit in Geneva

U.S. National Security Advisor Jake Sullivan announced this week that the United States will apply additional sanctions on Russia over the Alexei Navalny poisoning, with the move coming mere days after President Biden and Russian counterpart Putin’s summit in Geneva. This is the second set of sanctions over the Russian regime’s use of chemical weapons to poison the opposition party leader. The first set of sanctions were initiated in March of 2021 when Alexei Navalny was placed under arrest on his return to Russia, after recovering from a coma in a German hospital. The announcement of the plan for the new sanctions also comes after last week’s Geneva summit which established the return of the envoys to each other’s nations. This was the only direct progress made during the meeting, however both Biden and Putin expressed that the gathering was positive and constructive. Relations between the United States and Russia have been fraught with tension over the preceding decades, which has led both sides to approach the other with a cautious mindset that aims to prioritize tolerance and stability.