Welcome to our NIF Newsletter. This week, we recap Thursday’s NIF Zoom event regarding the recent war in Gaza and the United States’ position in the region moving forward. Meanwhile, in our news headlines: Israeli police elicit widespread condemnation for detaining prominent Palestinian activists and journalist Givara Budeiri, and Human Rights Watch releases a new report outlining the perils of Rohingya refugees who have been relocated to the remote island of Bhasan Char.

This week, the National Interest Foundation hosted a Zoom event discussing the recent war in Gaza and the United States’ position in the region moving forward. Our distinguished panelists for the event were commentator and professor Peter Beinart, lawyer and analyst Diana Buttu, former Ambassador Edward M. Gabriel, and former Congressman Jim Moran. The panel was moderated by Kelley Beaucar Vlahos of the Quincy Institute for Responsible Statecraft. The speakers touched on a variety of topics including the United States’ prospects of engaging with Hamas, the perception of the United States among Palestinians – particularly in Gaza, and the political and social atmosphere within the U.S. regarding the Israeli-Palestinian conflict, among others.

In his remarks, Peter Beinart spoke about how American negotiations with the Taliban demonstrated that the U.S. has the ability to engage with any kind of group when it has credible interests at stake, and that there is no reason why it cannot conceptually do so with Hamas as well – especially since indirect communication via intermediaries already exists. He also highlighted the increased sensitivity to questions of representation in our current societal climate, and the fact that this has helped to spur a notable and significant shift with respect to growing empathy for Palestinians’ struggle for social justice in the face of oppression. Beinart praised activists and intellectuals for their efforts to draw attention to the most important consideration of all, that of basic human rights, freedoms, and equality under the law for all citizens.

Diana Buttu expressed that engaging with Hamas should be a no-brainer for the United States, because not doing so has negative ramifications such as ensuring that there are no Palestinian elections and that a split remains between the respective governing factions in the West Bank and Gaza Strip. She also addressed the blockade in Gaza, and how this has intensified over the past 15 years, leading to major food and supply shortages for residents living there. The blockade, in conjunction with 3 separate Israeli bombing campaigns during this period, has had a devastating effect on the Palestinian territory’s infrastructure and made it virtually impossible to bring in the necessary reconstruction materials. Like Beinart, Buttu emphasized that the essential element to the make-up of any political entity – whether it be through a one-state or two-state solution – must be focused on valuing human life and dignity for Israelis and Palestinians alike.

Ambassador Gabriel talked about the political realities on the ground as it pertains to any prospects for the Israeli-Palestinian peace process, and how our major aim should be to help President Biden live up to his words that he wants to be a defender of human rights and lead with American values and principles. He stressed that Palestinian rights are human rights, and that we need to re-focus on aid which would help bolster civil society organizations and institutions. Ambassador Gabriel also discussed the relevance of pressuring our lawmakers here in the U.S. to stand up for the ideals that we hold dear, and call out the Israeli government for its blatant human rights abuses and violations.

Congressman Moran commented on the political implications within the U.S. stemming from the recent conflict in Gaza, and how some progressive lawmakers and organizations have gained traction in voicing their concerns with the Israeli government’s behavior. These individuals and groups are rightly advocating for a more rational and balanced American approach to the Israeli-Palestinian issue. He also pinpointed the admirable work of certain analysts, intellectuals, diplomats, and politicians in taking on the topic from a thoughtful and understanding perspective, and for focusing on the imperative need for social justice. Lastly, he highlighted the importance of the U.S. employing a long-term vision towards the matter in order to be adequately prepared for what the Israeli-Palestinian situation will look like in the coming years and decades. 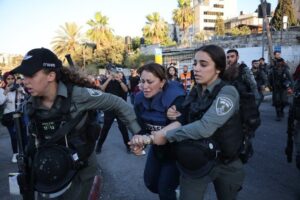 Israeli police have been criticized for their detainment of activists and journalists. (Photo from AP)

Israeli security forces have drawn widespread condemnation for enacting “Operation Law and Order” which seeks to round up Palestinian activists and demonstrators who protested against Israel’s recent string of human rights abuses, both in its bombing campaign of Gaza and towards residents in the West Bank. So far, over 2,100 Palestinians have been unlawfully taken into custody by the Israeli authorities as part of this campaign, with several prominent activists among them. Muna and Mohammed El-Kurd, two of the most well-known Palestinian activists in the neighborhood of Sheikh Jarrah, were among the individuals arrested on suspicion of planning and participating in riots. In reality, these two, along with the other activists detained by Israel, organized protests to demonstrate against the Israeli government’s bombardment of civilian and residential targets in Gaza as well as the plans to forcibly displace numerous Palestinian families from their generational homes in Sheikh Jarrah. In the preceding days, Israeli police have also been criticized for the assault and arrest of journalist Givara Budeiri while she was covering a demonstration. The illegitimate detainment of Palestinians and journalists during the course of the operation is yet another example of state-sponsored discrimination by Israel, and adds to its reputation as one of the worst countries in the world for human rights. 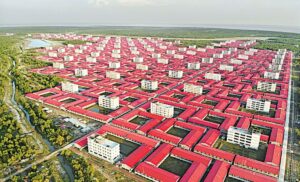 A new HRW report highlights the decision to move thousands of Rohingya refugees to a remote island. (Photo from AP)

Human Rights Watch (HRW) released a report this week detailing Bangladesh’s plan to move nearly 100,000 Rohingya refugees to a remote island in the Bay of Bengal. The island in question, Bhasan Char, has a heightened risk of monsoons, cyclones, and other weather-related disasters, as well as having insufficient health care and infrastructure to support such a population. The refugees will be moved from Cox’s Bazaar, where nearly 850,000 people live in overcrowded and squalid conditions. Human Rights Watch called for an independent assessment of Bhasan Char’s habitability by the United Nations, and warned that many of the refugees moved to the island were forced to do so without giving their consent. Currently, just over 18,000 refugees have been moved to Bhasan Char, and Bangladesh’s government has announced plans to transport nearly 80,000 more Rohingya to the island.