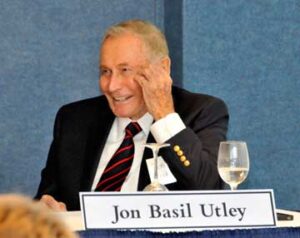 The National Interest Foundation (NIF) was saddened to learn about the passing of Jon Basil Utley this past weekend. Mr. Utley was a dear friend of NIF President, Mr. Khaled Saffuri, for over 20 years and the two traveled around the world many times together.

Mr. Utley was the publisher of The American Conservative magazine. He was a highly-respected and revered anti-war activist and will be greatly missed.

Mr. Utley’s full biography can be found below:

Jon Basil Utley was the publisher of The American Conservative. Utley is a graduate of Georgetown University’s School of Foreign Service with language studies in Germany and France. He first worked for American International Group insurance in Cuba, Venezuela, and Colombia. Later he became a foreign correspondent in South America for Knight Ridder newspapers and for 17 years, starting during the Reagan Administration, was a commentator about third world issues on the Voice of America. He managed an oil drilling partnership in Pennsylvania and later worked in real estate development. He has written for the Harvard Business Review, Washington Post, and other papers. He was formerly founding editor of The Bogota Bulletin, associate editor of The Times of the Americas, and a contributing editor to The Conservative Digest. He was born in Moscow. His father, a Russian trade official, was sent to the gulag and executed at the Brick Quarry in Vorkuta for being one of three leaders of a hunger strike. His mother, Freda Utley, became a prominent anti-communist author and activist.