Late September saw the return of climate protests throughout France. The demonstrators, who have been dubbed as “Yellow Vests” for their fluorescent outerwear, had a lull over the summer but returned to the streets en masse to protest French President Emmanuel Macron’s environmental policies. Authorities estimated 16,000 people turned out, with a majority of the demonstrations occurring in Paris. The Yellow Vest protestors were overwhelmingly peaceful, but there were members of the radical “black bloc” who infiltrated the demonstrations and established barricades, set fire to trash bins, and threw paint on the front of a bank. In response, French police dispersed crowds with tear gas and made over 160 arrests. The protests initially began after a tax on fuel was implemented last January. People who lived in rural areas and faced a long commute everyday began the protests, arguing that they could not afford the higher fuel prices. The fuel tax, coupled with the elimination of France’s wealth tax and slashing of labor laws, reinforced the long-held belief among rural French citizens that President Macron is a president for the rich. The demonstrators originally demanded the fuel tax be repealed but have since added calls for a rise in the minimum wage. President Macron has so far refused to blink, and has not caved to any of the protestors demands.

The Yellow Vest protestors also marked the one-year anniversary of the demonstrations starting by returning to the sites of the initial protests throughout Paris. Protestors sang “happy birthday” to the protests, and clashed with police, who had attempted to call off the protest because of violence at the agreed upon location. Two dozen protestors were arrested, and a journalist was bloodied by a projectile fired by demonstrators.

France has also seen anti-racism protests, fueled by the Black Lives Matter movement and the murder of George Floyd in the United States. Protestors have condemned police brutality against minorities in France, and demanded that France’s colonial history in Africa be confronted and condemned. In response, Emmanuel Macron gave an address saying that the country must “lucidly look together at our history…particularly our relationship to Africa.” Demonstrators have demanded that statues and monuments to colonial figures be removed, but the government has rejected those demands. 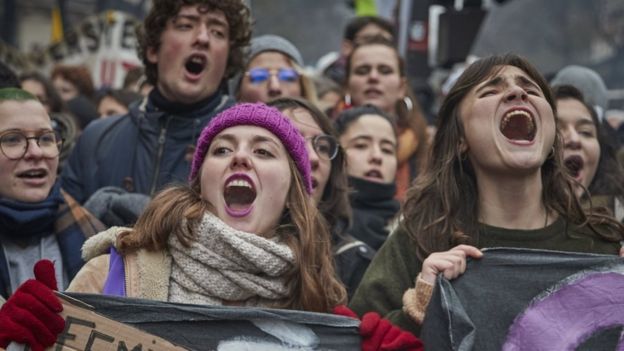 French police said 800,000 people took to the streets across the country, including 65,000 in Paris. Protests have rippled across France in response to French President Emmanuel Macron’s plans to reform the country’s generous pension system. Many who took to the streets or took part in strike are worried about earning less and retiring later under the new rules, which involve combining more than 40 retirement schemes into one big points-based system. While most of the demonstrations were peaceful, things turned violent when people began throwing bricks, setting things on fire, and police had to start using tear gas. In total, 71 arrests were made across the city, police said. At least nine of the 16 metro lines in Paris were closed at rush hour, while others ran limited services. Some schools remained shuttered and hospitals were left understaffed.

In 1995, France experienced protests abrupt when Prime Minister Alain Juppe wanted to unify France’s pension system. Juppe eventually abandoned the plan. The Macron administration will hope to avoid a repeat of the country’s general strike over pension reforms in 1995, which crippled the transport system for three weeks and drew massive popular support, forcing a government climb-down.

The Macron government has recently unveiled a new retirement plan which has only served to further anger French pensioners. The French government has already made a number of concessions on the retirement bill, which saw a marked reduction in protests. However, unions called a strike on transportation workers in the latter part of January to try and push the government into further concessions on the bill. Emmanuel Macron will seek to avoid the same situation that Alain Juppe encountered in 1995.

Posted in A World on Fire