Our ‘Election 2020 Weekly Roundup’ takes a look at the latest updates in the presidential race between President Trump and former Vice President Biden, in addition to some key Senate contests from across the country. This week, we examine the notable new developments in the competitive Senate races in Arizona, Colorado, Maine, and Michigan. 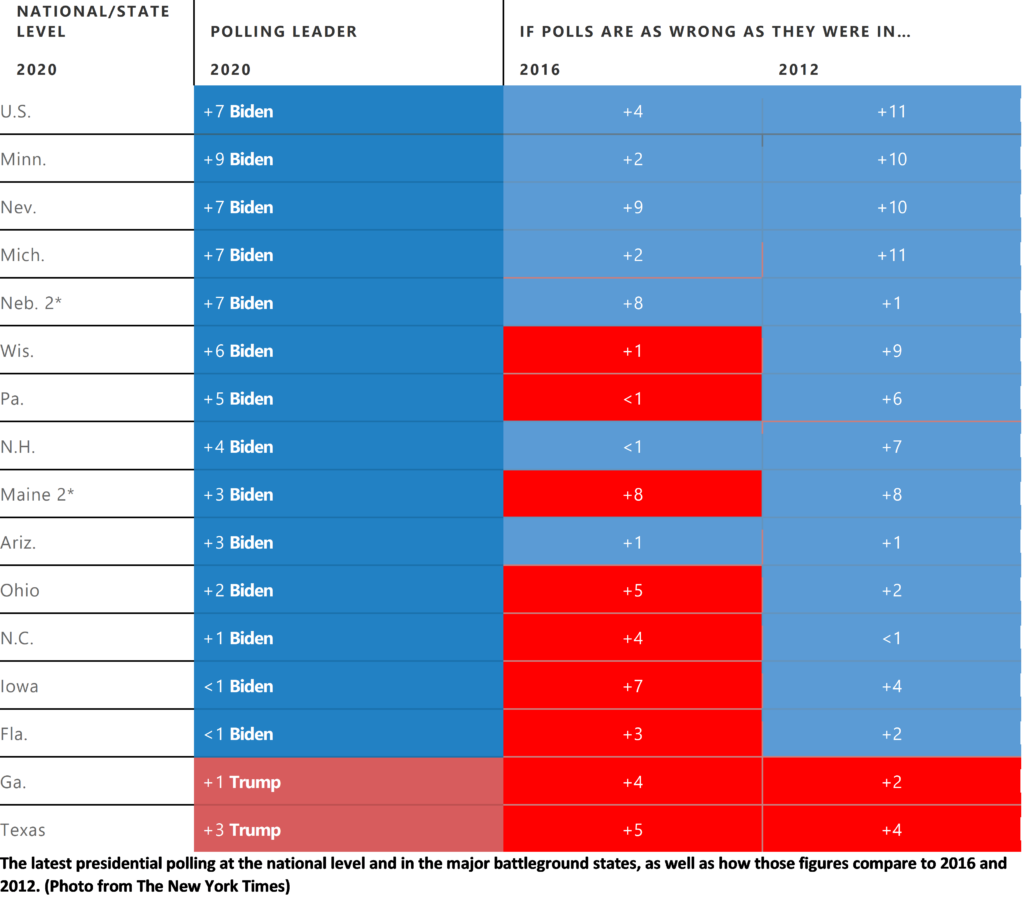 This week, the latest polls indicate that there hasn’t been much change in support for either Democratic nominee Joe Biden or President Trump, with Biden still enjoying a lead in most nonpartisan polls. President Trump continues to trail former Vice President Biden nationally, and in many battleground states, with the exception of Georgia and Texas. This includes critical states such as Florida, Arizona, Wisconsin, North Carolina, Ohio, Pennsylvania, and Michigan, where former Vice President Biden remains in the lead. Without winning these states, President Trump’s prospects for re-election are slim, as the electoral college would be heavily in Biden’s favor. The most recent data from Siena College indicates a 7-point national lead for Biden, while a USC Dornsife poll shows a larger margin, with Biden ahead by 9 points.

In another new development over the weekend, a New York Times report into President Trump’s tax returns has drawn focus onto that issue as well. An investigative report released by the New York Times on Sunday afternoon has dragged the president’s taxes back into the spotlight as Election Day nears. In 2016, Donald Trump’s taxes were the focus of attacks by Hillary Clinton and Democrats who alleged his reluctance to release his tax returns was proof of fraudulent business practices, tax evasion, and massive debts owed to foreign countries. The president refused to release his taxes, and the New York Times has now allegedly obtained copies of significant tax documents. These documents show, in part, massive losses on the president’s businesses, and a serious degradation of his wealth, to the point that his net worth is far below what he claims it is. Additionally, President Trump paid only $750 in taxes during his first two years in the White House by declaring massive losses and using write-offs. The president has slammed the New York Times’ reporting as “fake news,” but the Times said it had independently verified the documents, and was in possession of additional evidence that it would release in due time. 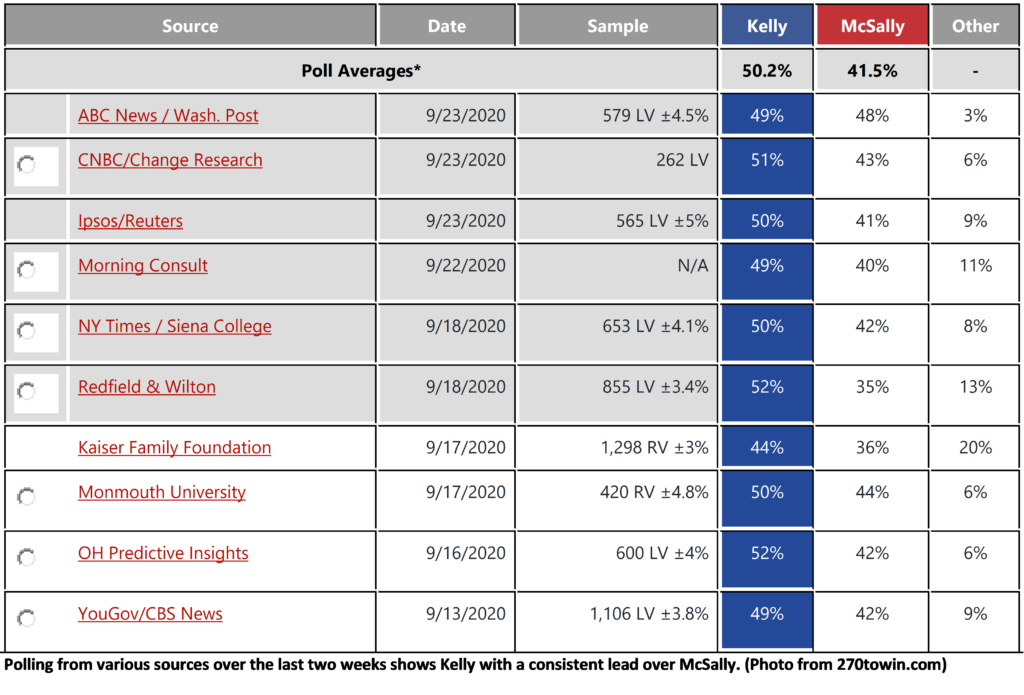 In the Arizona Senate race between Republican incumbent Martha McSally and Democratic challenger Mark Kelly, the averages from the latest polling figures show Kelly with a nearly 9-point lead, 50.2% to 41.5%. Kelly has the edge over McSally in all of the recent polls conducted over the past two weeks, with the gap ranging from as low as 1% to as high as 17%. While the lower end of the spectrum is well within the margin of error, the Kelly campaign will be delighted to see that the newest surveys across the board show a consistent lead for him in his race to unseat McSally. However, McSally on the other hand will be boosted by the fact that the latest poll conducted by ABC News/Washington Post shows a tighter gap between her and Kelly than the other polls in recent weeks. If the pattern holds true and Kelly wins, it would be the first time in almost 70 years that the state of Arizona has two Democratic U.S. senators in office at the same time. This high-profile race to complete the term of the popular and widely-respected John McCain, who passed away in August of 2018, is one of the key Senate contests that Democrats are targeting as a potential flip as they attempt to win back control of the upper chamber of Congress in November.

This race in Arizona may also play a role in helping decide who fills the now-vacant Supreme Court justice seat, following the recent passing of Justice Ruth Bader Ginsburg. According to Arizona election law experts, a state statute would allow the winner of this special election to assume their seat early, thus possibly giving them a vote on the new justice. Of course, this does depend however on how the nomination and confirmation process plays out in the Senate in the coming weeks, as well as whether or not the Arizona Senate election results can be certified without any issues in time for a potential vote. Regardless, this is certainly another layer that adds to the already high stakes of this race in Arizona. Election forecasters and observers believe that voters in the state could go a long way in determining the balance of both the presidency and the Senate. 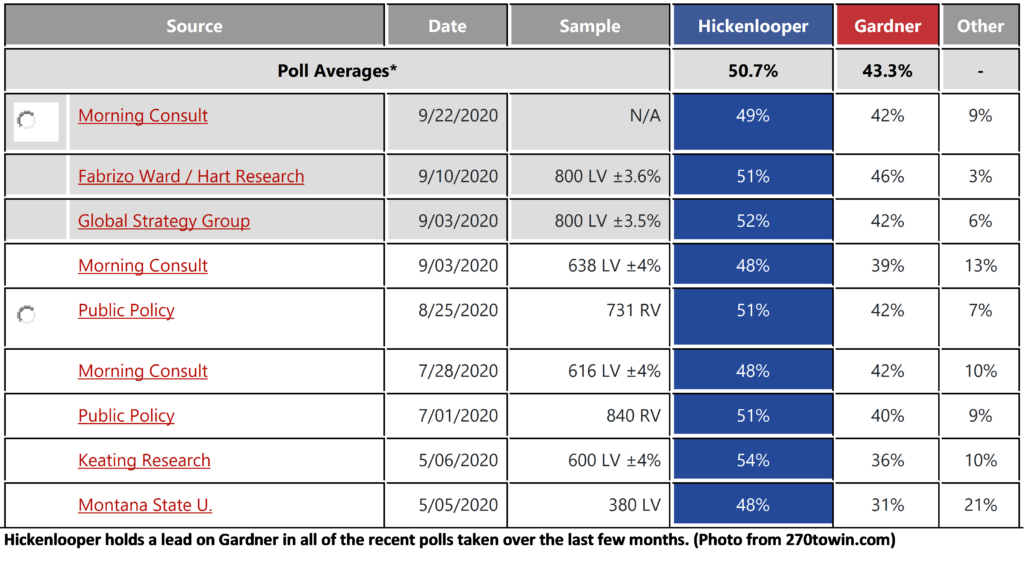 Democratic challenger and former Colorado Governor John Hickenlooper is maintaining a steady lead over incumbent Republican Cory Gardner in the race for one of Colorado’s two U.S. Senate seats. Polling averages from the most recent surveys conducted this month show Hickenlooper with an approximately 7-point lead over Gardner, 50.7% to 43.3%. Additionally, all of the polls taken since late July find that the gap between the two candidates falls within the 5%-10% range, with Hickenlooper holding an advantage of that margin in all cases. In one of the latest developments with the race last week, the reputable Cook Political Report also adjusted their classification for this contest between Hickenlooper and Gardner from “toss-up” to “lean Democrat,” thus now indicating a slight edge for the Democratic candidate. The change in the race rating highlights what the polls have shown for months – that Hickenlooper is favored to unseat Gardner in this critical matchup, one that could have major implications regarding which party has the majority in the U.S. Senate.

As it has done for many of the key competitive 2020 Senate races, the Supreme Court vacancy brought about by the passing of Justice Ruth Bader Ginsburg has become a focal point between Hickenlooper and Gardner. In a new ad released last week, Hickenlooper attacks the incumbent Republican, contending that Gardner is “ready to rush through a Supreme Court justice at lightning speed” rather than address other pressing issues which concern their state’s constituents. The former Colorado governor specifically references Gardner’s perceived inaction on combatting climate change, infrastructure development, and lowering health care costs, among other things. He also criticizes him for supporting a potential election year vote on filling the Supreme Court vacancy despite the fact that in early 2016, Gardner did not do the same following the passing of Justice Antonin Scalia. Gardner is already one of the Senate’s most vulnerable Republican incumbents this November, and Hickenlooper is hoping to further energize some of the state’s voters who may be angered by Senate Republicans’ attempts to rush through a new Supreme Court confirmation. 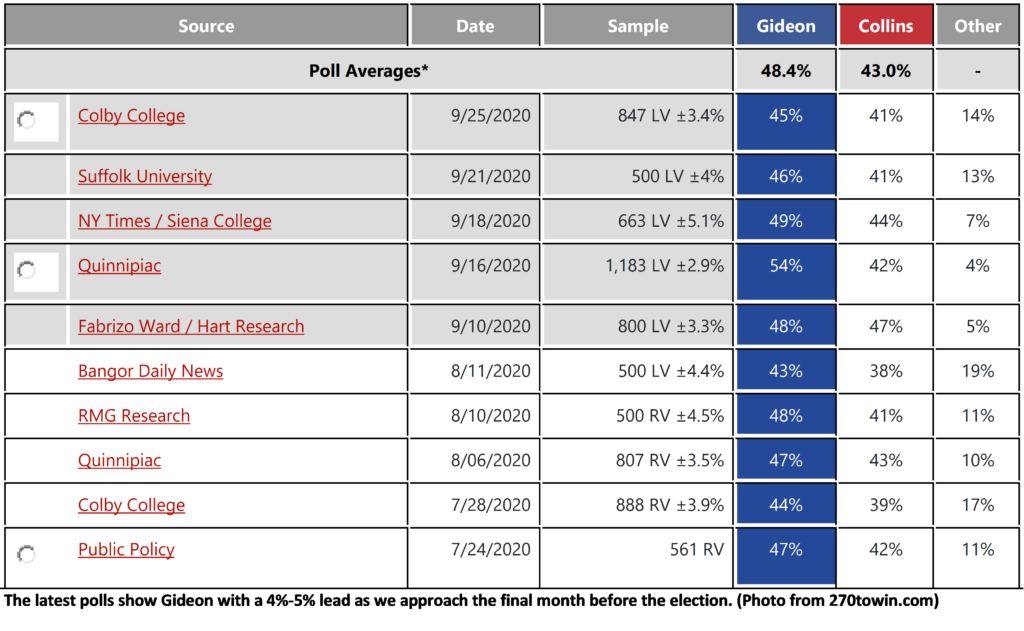 In recent weeks, Maine’s Senate race between incumbent Republican Susan Collins and Democratic challenger Sara Gideon has taken shape. In one of our previous election round-ups, Maine was rated as a toss-up between Gideon and Collins. Now, however, Sara Gideon has taken the consistent lead as a result of the incumbent’s declining popularity and Maine’s declining alignment with the Republican Party. Among other issues, the Senate Republicans’ effort to rush through a replacement for Supreme Court Justice Ruth Bader Ginsburg has alienated Collins from the electorate, despite her releasing a statement calling for the Supreme Court seat to only be filled after the election. Susan Collins’ Senate seat has been a key target for Democrats since the 2018 impeachment hearings against President Trump, when she voted to acquit the president. Now more than ever, Democrats sense that she is vulnerable and are keen to defeat her as part of their larger goal of flipping the Senate.

In the latest polls, Gideon has extended her lead on Collins. The last time Maine was covered in our election round-up, Gideon held an average lead of 4.5% based on a conglomeration of polls. Now, Gideon holds a 5-point lead according to the reliable Suffolk University poll, and a 12-point lead in a Quinnipiac University poll. Other pollsters including the New York Times/Siena College indicate a 5-point lead for Gideon. The Cook Political Report currently rates the race as a “toss-up” which will invigorate the Collins camp, but the incumbent is running out of time to overturn her current deficit in the polls. 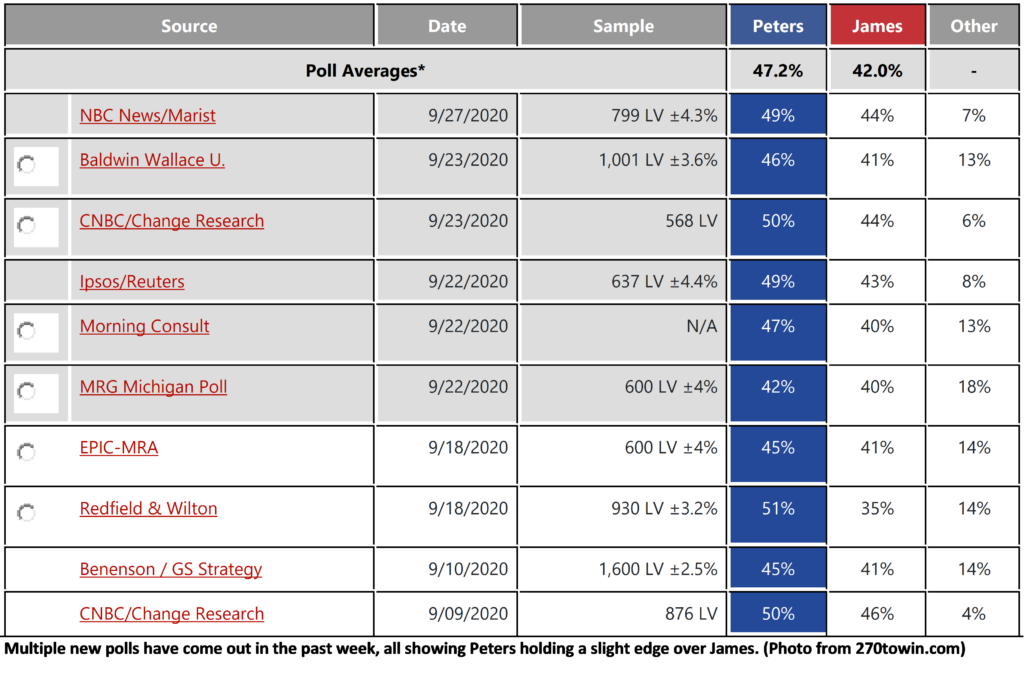 In Michigan’s Senate race, incumbent Democratic Senator Gary Peters has recently extended his lead over Republican challenger John James. James, who has held various elected offices throughout his career, has been viewed as a legitimate threat to Peters, and the National Republican Senatorial Committee was targeting Peters’ seat in order to consolidate the Republicans’ majority in the Senate. One of our previous election round-ups covered the race in Michigan, and at the time of publication, Peters was leading the race by a slim margin. Now however, Peters has extended his lead over James to a stronger margin of up to 8 percentage points. Both candidates are well known to the state’s electorate, with James having unsuccessfully challenged Senator Debbie Stabenow for her seat in 2018, and Peters previously serving as a U.S. House member before being elected to the Senate in 2014.

In the most recent polls, Gary Peters has extended his lead from where it was a month ago. In our prior election round-up that covered the Michigan Senate race, Peters led by a slim margin of 3 points. Now, however, Peters’ lead is up to between 5 and 9 points, depending on the pollster. According to the ultra-reliable Marist College poll, Peters’ lead stands at 6 points. In the equally reliable Hart Research poll, Peters is up by as much as 8 points. This does not bode well for James, despite his extremely strong fundraising. James has raised over $3 million more than Peters, including raising over $1.2 million more in the crucial summer months during this election year. The outcome in November remains to be seen of course, however the latest polling figures show that Peters has established himself as the favorite as we prepare to enter the final month before the election.