Our ‘Election 2020 Weekly Roundup’ takes a look at the latest developments in the presidential race between President Trump and former Vice President Biden, in addition to some key Senate contests from across the country. This week, we examine the competitive Senate races in South Carolina, Kansas, Alaska, and Texas. 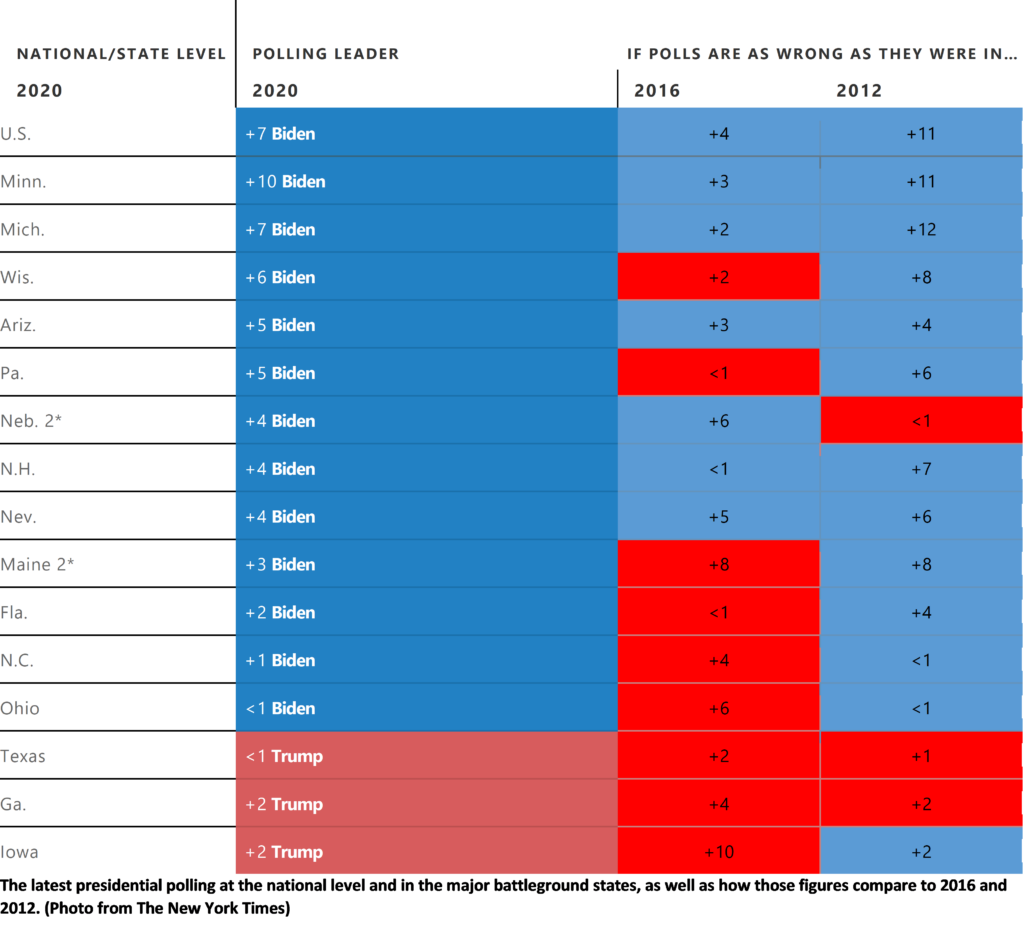 This week, the latest developments in the presidential race have largely been shaped by the death of Supreme Court Justice Ruth Bader Ginsburg on Friday. President Trump has pledged to nominate a replacement for Justice Ginsburg, while Democratic presidential nominee Biden called for the Senate to wait until after the election before voting on any potential successor. The latest polls following Justice Ginsburg’s death have showed that support for both Trump and Biden remained largely the same, with the exception of Biden consolidating his lead in certain states he already held an advantage in. Interestingly, new polling from Ipsos asked a specific question about replacing Ginsburg, with 62% of respondents saying the winner of the election should nominate Ginsburg’s successor. Supporting this is data from YouGov, which indicates that 51% of people believe Justice Ginsburg’s successor should not be nominated until after the inauguration. Adding to this, in the hours after Ginsburg’s passing, individual donors to the Democratic fundraising platform ActBlue skyrocketed, with nearly $30 million raised in a 12-hour period. This shows a renewed energy among Biden supporters which could be reflected in new polls that will be released over the course of this week. Hinting at this is new data collected by the Marquette University Law School, which released a poll that showed 59% of Biden’s supporters view the Supreme Court as a vital factor in determining who they vote for.

Around the country, Democratic presidential nominee Biden is continuing to lead President Trump by a modest but significant amount. Perhaps most interesting is Biden’s performance in Texas’ polls, where the president is now only enjoying a one-point lead in a state that Republicans haven’t lost since 1976. Additionally, in swing states such as Wisconsin, Arizona, and Florida, Biden continues to hold the advantage, but with the caveat of President Trump clawing back part of the deficit. States such as these will likely be key in determining who wins the White House in November, with former Vice President Biden in pole position according to the latest data. Additionally, the president continues to see his poll numbers harmed by the untiring revelations from investigative journalist Bob Woodward’s new book, which details the inner workings of the Trump White House, particularly its failings on the COVID-19 pandemic.

This year’s Senate race in South Carolina is shaping up to be extremely close as we approach the upcoming election in early November. The contest features incumbent Republican Lindsey Graham, who is seeking a fourth term as one of the state’s two U.S. Senators. Prior to being elected to this role in 2002, Graham served in the U.S. House of Representatives and before that, in the South Carolina House of Representatives. Graham’s Democratic challenger is Jaime Harrison, who served as Chair of the South Carolina Democratic Party from 2013 to 2017 and is also an associate chairman of the Democratic National Committee. Harrison is a familiar figure among the state’s Democratic base but he faces an uphill battle, as no Democratic candidate has been elected to statewide office in South Carolina since 2006. However, the race appears to be tightening in recent months, and the prospects of a Democratic flip here are certainly within the realm of possibility.

The Cook Political Report rates this Senate race in South Carolina as “lean Republican,” indicating a slight edge to incumbent Graham. Inside Elections also categorizes the race in the same manner, but Sabato’s Crystal Ball gives a bigger edge to Graham by ranking it as “likely Republican.” Polling data aggregator RealClearPolitics ranks the matchup as “lean Republican” and recent surveys show that the gap between the candidates has evaporated. Two separate polls conducted by Quinnipiac University, one in August and another last week in mid-September, both show Graham and Harrison locked in a dead heat and tied – the first at 44%-44% and the second at 48%-48%. These figures are especially interesting because Graham and Harrison are neck and neck despite the fact that President Trump holds a 6-point edge over former Vice President Biden in the state’s presidential polling. This would suggest that some South Carolina Republicans are willing to vote for Trump, but not necessarily Graham. Ultimately, recent polling indicates that Graham is faced with the most significant challenge to his Senate seat since he was first elected to his current position back in 2002.

The early 2019 announcement from four-term incumbent Republican Senator Pat Roberts that he would not seek a fifth term as one of the two U.S. senators for the state of Kansas opened the door for a potentially competitive race. Republican U.S. Representative Roger Marshall and Democratic state senator Barbara Bollier are their respective parties’ nominees, having won the primaries held last month in early August. Marshall has been serving as a U.S. House member since 2017, after unseating Tim Huelskamp in the Republican primary and going on to win the general election. Bollier has been a member of the Kansas Senate since 2017, and prior to that, was a member of the Kansas House of Representatives for seven years. In late 2018, she changed her party affiliation to the Democratic Party after previously representing the Republican Party during her time as a state legislator. Both of Kansas’ U.S. senators are Republicans, however incumbent Governor Laura Kelly is a Democrat, highlighting that Kansans are capable of voting either way in a statewide election.

Republican candidate Marshall has a small edge over Bollier, according to the election forecasters. The Cook Political Report and Inside Elections both rate the Senate race as “lean Republican,” while Sabato’s Crystal Ball and RealClearPolitics rank it as “likely Republican.” The latest polling figures are consistent with this sentiment, as Marshall holds a narrow lead over Bollier in two surveys conducted after each candidate won their respective primary. These polls show Marshall ahead of Bollier 46%-44% and 43%-42%, however the gaps are well within the margin of error. If the data is a spot-on depiction of where the Kansas electorate stands regarding the race as we head into the final weeks of the campaign, Bollier has a legitimate chance to defeat Marshall in November, although the latter candidate certainly remains the favorite. Regardless of how accurate the recent polling numbers turn out to be on Election Day, Kansas looks set for its most competitive U.S. Senate race in years.

The race for Alaska’s second U.S. Senate seat has been growing increasingly close in recent weeks, with incumbent Republican Dan Sullivan facing a difficult challenge from Independent challenger Al Gross, who is running with the support of the Democratic Party. Alaska, which is traditionally considered favorable for Republicans, has been swayed recently by Independent voters. In 2016, Alaska voted overwhelmingly for President Trump, but did so with the highest percentage of Independent voters across the country. This indicates that while Alaskans tend to support Republicans, they are not beholden to the party if it acts in opposition to their values. This is a potential reason why Al Gross is making the Alaska Senate race so competitive. Sen. Sullivan is still predicted by most election forecasters to win re-election, but Gross has been narrowing his lead in the polls and Alaska has a history of electoral surprises.

In the latest polls, Dan Sullivan is tied with Al Gross, which is a marked improvement for Gross considering he trailed by as many as seven points over the course of the summer. Public Policy Polling indicates both candidates are tied at 43%, with a large number of the electorate still undecided or voting for a third candidate. Within that poll, Sullivan trailed by fifteen points among Independents, 49%-34%. This further indicates the importance of Independent voters in Alaska’s Senate race, as those individuals have large enough volume to fundamentally alter the race. Alaska is traditionally one of the most difficult states in the country to accurately poll, due to both a lack of traditional pollsters surveying the state and low responses. Despite this, the nonpartisan Cook Political Report rates the race as “likely Republican,” which will give Sullivan a boost despite his underwhelming poll numbers. 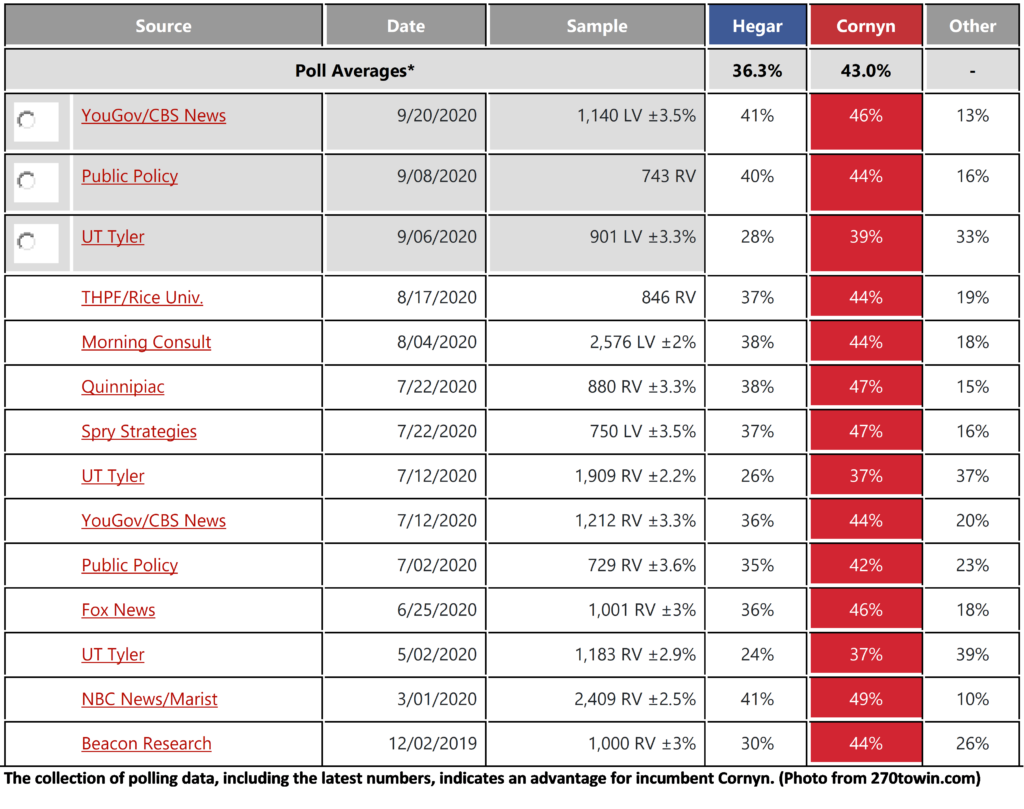 Despite Texas traditionally being one of the Republican Party’s strongest bastions of support, Democrats have targeted it in both the U.S. Senate and Presidential races this year. In November’s U.S. Senate election, incumbent Republican John Cornyn faces an increasingly competitive challenge from Democrat MJ Hegar. Hegar, an upstart Congresswoman from central Texas, is confident in her ability to oust Cornyn this November, as part of a larger Democratic wave to flip Texas blue. Hegar is employing strategies similar to Beto O’Rourke when he came surprisingly close to defeating Sen. Ted Cruz during Texas’ last Senate elections in 2018. Sen. Cornyn is running for a fourth term in the Senate, and has branded his opponent as a puppet of Nancy Pelosi and Chuck Schumer. The latest polls indicate Cornyn holds an advantage, but the Democratic Senatorial Campaign Committee has pledged upward of a million dollars in campaign contributions to Hegar in order to close the gap.

There have been a plethora of polls recently in Texas, with all of them showing Sen. Cornyn in the lead. According to YouGov/CBS News, Cornyn currently enjoys a five-point lead over Hegar, 46%-41%. The Tyson Group shows a slightly closer race, with Cornyn ahead by only two points, which is well within the margin of error for the poll. Public Policy Polling has also conducted polls recently in Texas, with the newest data indicating a four-point Cornyn lead. Within Texas itself, the University of Texas at Tyler conducted two polls, with one showing Cornyn enjoying an eleven-point lead, and the other showing a ten-point Cornyn advantage. Supporting the various poll numbers is the latest rating from the Cook Political Report, which currently rates the race as “likely Republican.” Despite Cornyn still leading the race, MJ Hegar will be optimistic about her recent performance, as she has narrowed Cornyn’s lead in several polls. However, Hegar still faces an uphill battle to defeat Cornyn, and with less than 50 days until the election, time is beginning to work against her.