On the eve of Election Day, our last ‘Election 2020 Weekly Roundup’ takes a look at the final updates in the presidential race between President Trump and former Vice President Biden, in addition to those from the key competitive Senate contests in Maine, Arizona, Georgia, and North Carolina. 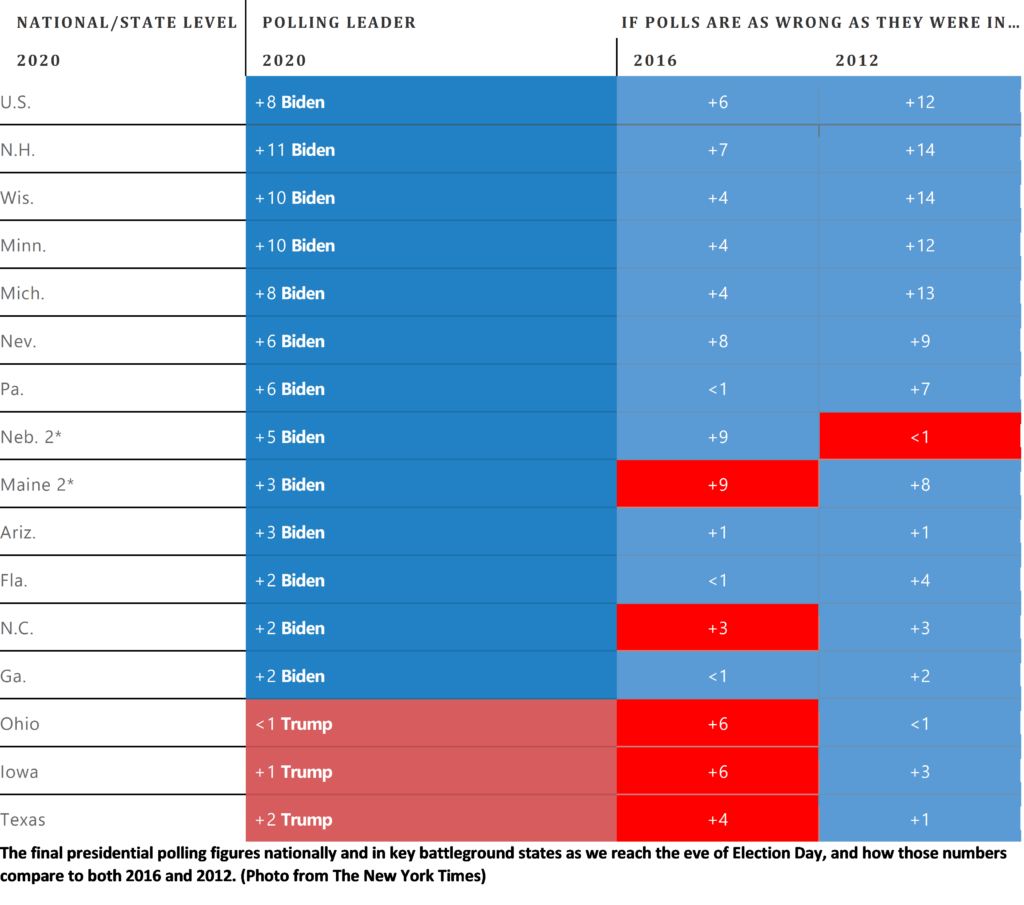 In the lead-up to tomorrow’s election, President Trump and former Vice President Biden are making last minute appeals to voters, and setting final expectations for Election Day. In critical swing states such as North Carolina, Pennsylvania, Arizona, and Florida, Biden is ahead with the latest polls showing leads of 2 points, 6 points, 3 points, and 2 points, respectively. Despite having the advantage in these states, Biden’s lead is within the margin of error, indicating that all of the races will be close. Nationally, Biden appears set to enter Election Day with an 8-point edge over the president, and also holds notable leads in the vital battleground states of Wisconsin and Michigan. Worryingly for President Trump, some polls also show Biden gaining ground in Texas, which would significantly tilt the balance of the race. In recent days, Trump has voiced his displeasure at certain states for allowing ballots cast by mail to be counted if they were received after Election Day, as long as they were postmarked at a prior date. He threatened to sue Pennsylvania over this, and North Carolina similarly allows such a practice. According to the available data, the majority of mail-in ballots already received have been cast by Democrats, and critics have raised the concern that the president is seeking to stifle ballots that would favor Biden.

Over the preceding days, Super PAC spending has also come to the fore. It was revealed that billionaire casino magnate and staunch Israel backer Sheldon Adelson donated a record $183 million toward various conservative causes, including President Trump’s re-election and vulnerable Republican Senators and Representatives. Sources close to Adelson indicated that his spending would increase to $250 million before the election. President Trump has pleased Adelson with his policies in the Middle East, such as moving the American Embassy in Israel to Jerusalem, pulling out of the Joint Comprehensive Plan of Action with Iran, and pressuring Arab nations to normalize relations with Israel despite no meaningful progress regarding the Israeli-Palestinian conflict. On the Democratic side, former presidential candidate Mike Bloomberg has become Biden’s largest donor, with roughly $107 million spent, the majority on ad buys in Florida. The 2020 election is on course to be the most expensive in history, with estimates indicating a total of about $14 billion being spent. This is more than double the amount recorded in 2016, which broke all fundraising records at the time. 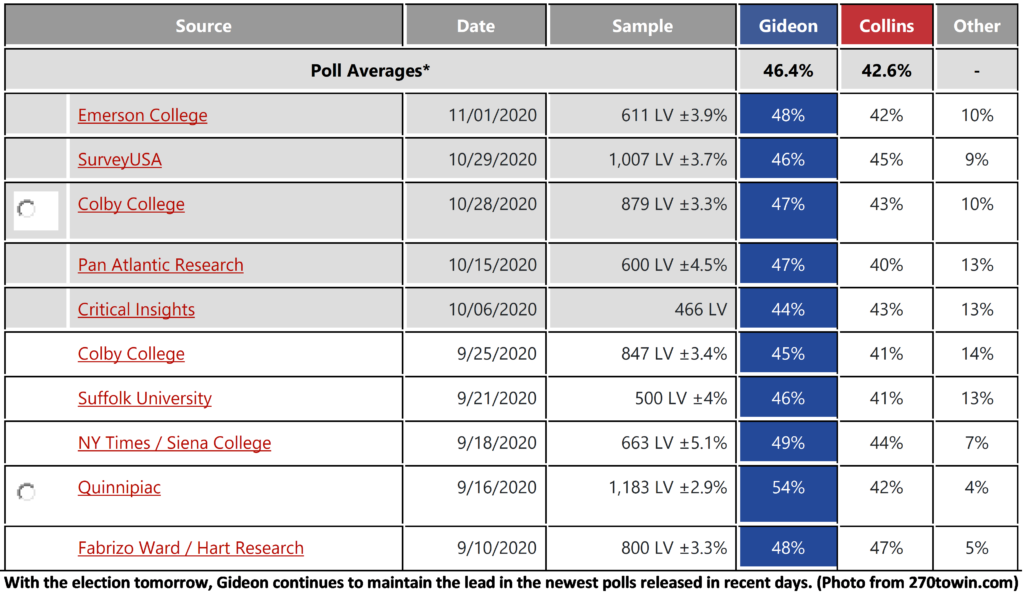 As voters in Maine prepare to head to the polls and cast their ballots tomorrow, Democratic candidate Sara Gideon continues to lead incumbent Republican Susan Collins in the latest surveys released during the final days of the campaign for U.S. Senate. New polls conducted by Emerson College, SurveyUSA, and Colby College show Gideon ahead of Collins by 6 percentage points, 1 percentage point, and 4 percentage points, respectively. Collins has consistently trailed her challenger in all of the reputable surveys over the past few months, with Gideon holding an advantage of almost 4 percentage points in the recent poll averages, 46.4% to 42.6%. The margin of difference between the two candidates has ranged from as low as 1 percentage point to as high as 12 percentage points during this time period. While Gideon has narrowly maintained the lead throughout this home stretch of the election cycle, the gap is still right around the margin of error for all of the aforementioned data. As such, this Senate race in Maine will be one of the most interesting to watch tomorrow as results come in, both because of its pattern of competitiveness and the fact that it should play a key role in helping to determine which political party has control over the upper chamber of Congress. 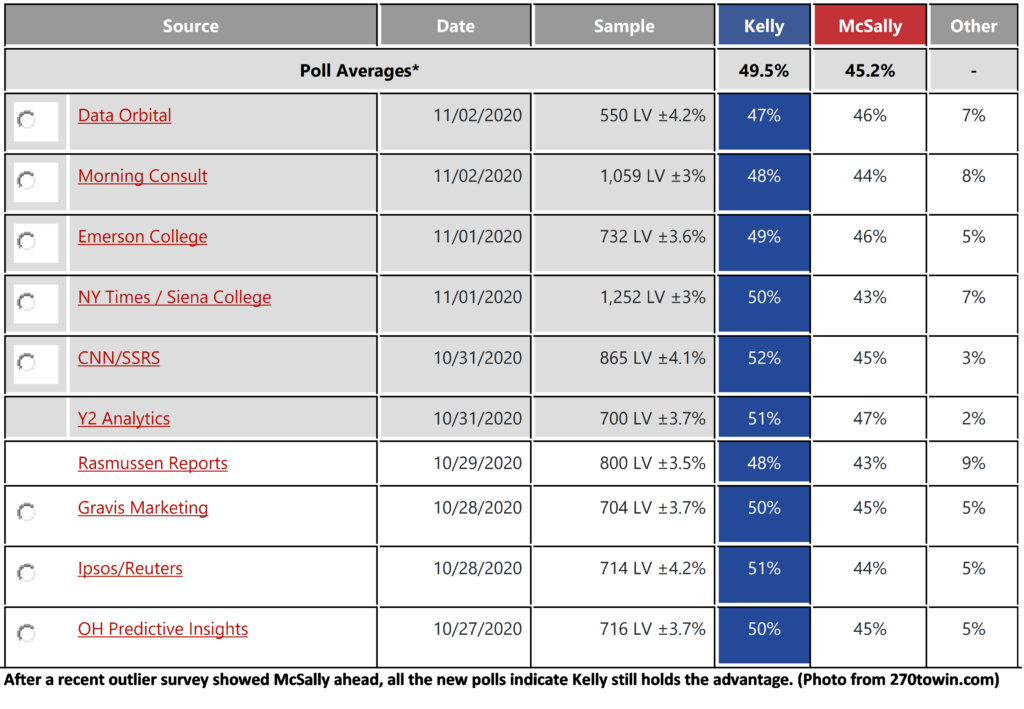 In the Arizona Senate race, multiple new polls show Democratic candidate Mark Kelly continuing to maintain the lead over incumbent Republican Martha McSally by a margin of 1 to 7 percentage points. Kelly has been found to be ahead of McSally in all of the surveys conducted in recent weeks, with the exception of one outlier poll back on October 23rd. Overall, according to the poll averages from the latest data, Kelly is set to enter Election Day with a slightly above 4-point edge, 49.5% to 45.2%. While the gap between the two candidates is still relatively close, the race’s polling trend throughout the last several weeks is consistent with election forecasters’ contention that McSally is one of the U.S. Senate’s most vulnerable Republican incumbents. The focus on constantly gathering and analyzing polling data in this race highlights how critical it is perceived to be – and in fact, more than 10 new surveys have been released in the past week alone. Ultimately, both Democrats and Republicans have identified this Senate contest in Arizona as one of the most important in the country, as the former see it as one of their best chances to flip enough seats and win back control of the U.S. Senate while the latter look at it as vital to hold on to in order to maintain their majority. 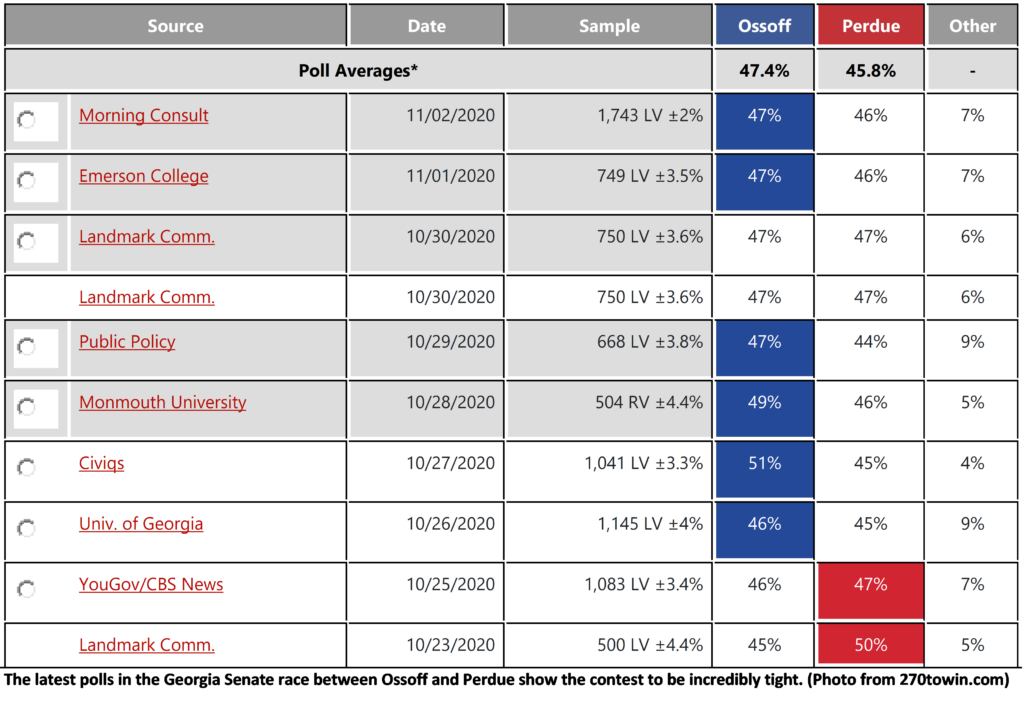 In Georgia’s Senate race, Democratic challenger Jon Ossoff has defied partisan tradition and is deadlocked with incumbent Republican Sen. David Perdue. While Perdue is a first-term Senator, Republicans have held his seat for decades. Ossoff, however, has harnessed energy from Democrats throughout the state to pose a significant threat to the incumbent. Perdue is also feeling the heat, evidenced by his actions in the final days of the campaign. He abruptly withdrew from a high-stakes debate that was scheduled to be held over the weekend, and has been forced to spend millions of dollars on advertising to fend off attacks from Ossoff. In the latest polling, Ossoff and Perdue are almost dead even, with Ossoff holding a 1-point advantage in most polls. To explain Perdue’s deficit, experts have pointed to the “purpling” of Georgia in recent years with the rise of the Democratic Party in the state, as well as President Trump’s poor approval ratings over his handling of the coronavirus pandemic. Georgia is also holding a special election for the state’s second Senate seat to decide who completes the remainder of Johnny Isakson’s term after he resigned in 2019. Georgia’s Gov. Brian Kemp appointed Kelly Loeffler on an interim basis, and she is running against Republican Rep. Doug Collins and Democrat Raphael Warnock, a pastor turned politician. Under the rules of the special election, if no candidate secures at least 50% of the vote, a run-off will occur in early January 2021. The latest polling indicates Warnock holds the advantage, but is well short of the 50% threshold. Accordingly, it appears likely that a run-off will be necessary, and Republicans will be worried about the possibility of losing both Senate seats in a state that has trended conservative for years. 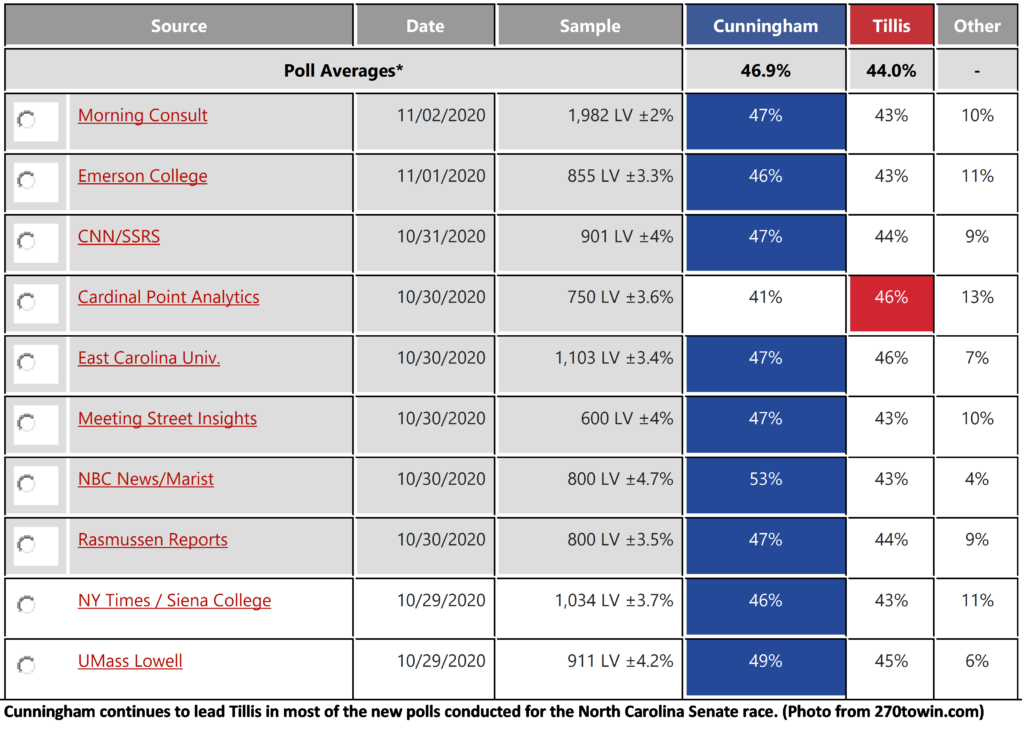 North Carolina’s Senate race is coming to a slow conclusion, with both candidates taking different approaches to their final days of campaigning. Incumbent Republican Senator Thom Tillis has been travelling throughout the state with big-name Republicans such as President Trump, Sen. Ted Cruz, and former Sen. Nikki Haley in an attempt to boost his standing before Election Day. Contrasting this, Democratic challenger Cal Cunningham has mostly avoided large campaign events, and has only held small gatherings that his campaign has declined to promote publicly. Cunningham’s campaign is reeling from the aftermath of an extramarital affair becoming public just as polls showed him with a strong lead, and they have stated that it is an intentional strategy to meet with voters and grassroots organizations directly, instead of holding large “super-spreader” rallies. Tillis has accused him of hiding from voters, but the latest polls still show Cunningham with the lead, which would indicate his strategy is working. In the most recent polling, Cunningham’s lead has been narrowed but remains between the range of 1 and 10 points, depending on the pollster. There is also one outlier survey which shows the Democratic challenger trailing Tillis. Both political parties are transfixed on North Carolina with the election only hours away, and the outcome of this Senate race will be crucial in determining which one wins the Senate majority.