Our ‘Election 2020 Weekly Roundup’ takes a look at the latest updates in the presidential race between President Trump and former Vice President Biden, in addition to the key competitive Senate contests from across the country. This week, we examine the notable new developments in several tight Senate races including South Carolina, Kansas, Georgia, and North Carolina. 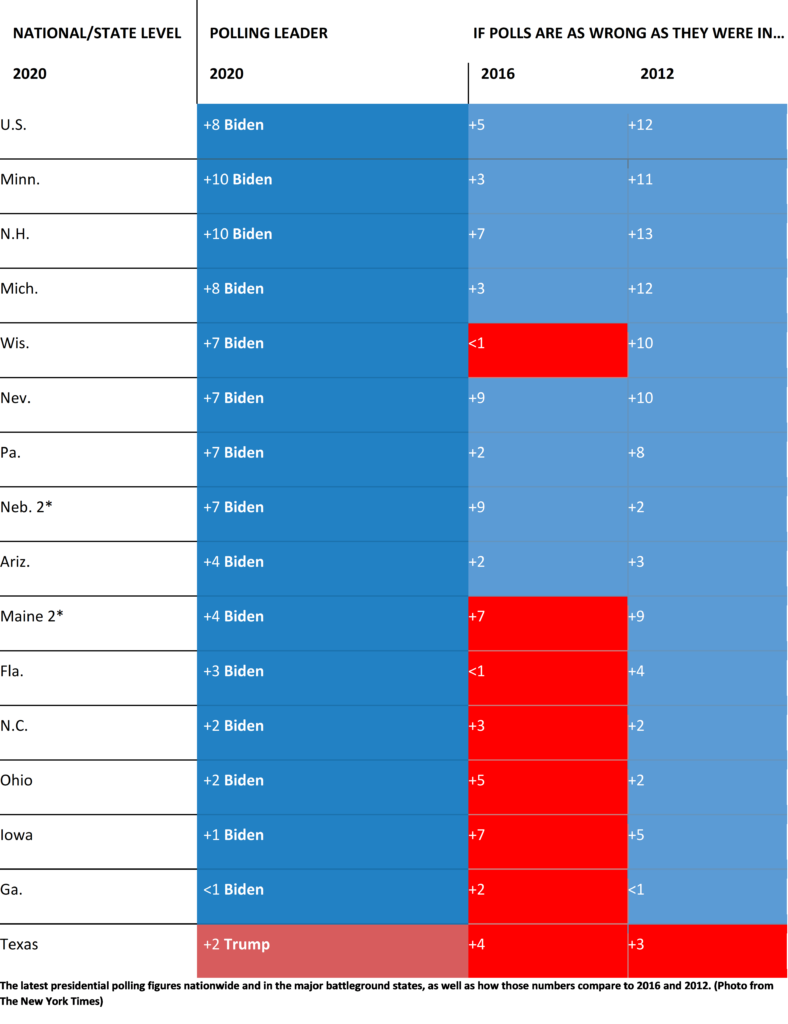 Over the course of the past week, President Trump and Democratic nominee Biden participated in the first presidential debate, and Trump tested positive for COVID-19. The president first tested positive for the virus last Thursday, following the first debate between him and Biden on Wednesday evening. A senior adviser to the president, Hope Hicks, had previously contracted COVID-19, and it is likely that she passed the virus to the president. Last Friday, President Trump was moved to the Walter Reed Military Medical Center for closer monitoring as his condition worsened. The White House has downplayed the severity of the president’s illness on multiple occasions, but has been contradicted by anonymous sources from within the administration who allege that the president was far sicker than was being let on, as evidenced by the medication he was taking. However, President Trump took to social media to declare he was feeling well, and hopeful of returning to the White House early this week.

The other defining event that shaped the presidential race this week was the first presidential debate. The tone of the event was confrontational and chaotic, with President Trump being criticized by allies and opponents alike for coming out too hot and aggressive. Moderator Chris Wallace was also criticized for failing to control the debate stage, and allowing the president to constantly interrupt former Vice President Biden. Following the debate, polls indicated that Biden had extended his lead over President Trump. At the national level, Biden holds an 8-point edge over Trump, in addition to leads in key battleground states including Wisconsin, Michigan, Arizona, Florida, North Carolina, and Ohio. The former vice president also holds a slender advantage in Iowa and Georgia, while Trump maintains a small lead in Texas as we enter the final month before the election. The Senate race between Republican incumbent Lindsey Graham and Democratic challenger Jaime Harrison in South Carolina has consistently remained one of the closest in the country in recent weeks, according to the latest polling figures. Surveys conducted in August and mid-September showed the candidates either tied or within 1 percentage point of each other, and the newest polls taken over the past two weeks have followed the exact same pattern – with Graham leading by 1% or tied with Harrison. This trend, coupled with the increased national attention that the race has been receiving because of the new Supreme Court vacancy and Graham’s position as the Chair of the Senate Judiciary Committee, has turned it into one of the most intriguing matchups to watch as we approach November. In Graham’s three prior Senate re-election races, he has defeated his Democratic opponents by an average margin of around 14%, so this is by far the most significant challenge that he has faced to retain his seat. The race this time is so tight that in recent days, the Senate Leadership Fund, a top Republican Super PAC, has pledged to spend an additional $10 million to help boost Graham. One of the factors that Harrison is hoping to capitalize on is potential voter frustration with Graham’s inconsistency regarding filling a Supreme Court vacancy during an election year. Back in early 2016, the Republican incumbent strongly emphasized that he did not support replacing Justice Antonin Scalia before that year’s election, however he has controversially flipped his position this time in 2020 and expressed that he would support doing so following the passing of Justice Ruth Bader Ginsburg – despite the election being mere weeks away in this year’s case. Overall, the fact that Graham’s seat is in play for Democrats is noteworthy as they look to win back control of the Senate. If the latest polling developments are any indication, this race should go down to the wire and provides Democrats with one of their best opportunities to flip a critical Senate seat in November.

One of the latest developments in the Kansas Senate race between Republican nominee Roger Marshall and Democratic nominee Barbara Bollier has seen the former expand his lead over the latter. The most recent poll released last week found Marshall with a 50%-43% advantage over Bollier, a significant jump to a 7-point gap now compared to the 2-point edge he held back in mid-August. The finding is also notable because it is the first time that the gap between the two candidates has exceeded the survey’s margin of error since Marshall and Bollier won their respective party’s nomination. The race has been so unexpectedly close that the Senate Leadership Fund announced it would be spending an additional $7.2 million in Kansas starting this week to try and lock up support for Marshall. While it does currently have a Democratic governor, Kansas is normally a Republican stronghold and the state has not elected a Democrat to the Senate in almost 90 years. However, Bollier is certainly a formidable candidate, having served as a statewide legislator for around 10 years and being a former Republican who has presented herself to voters as a moderate centrist Democrat. She changed her party affiliation from the Republican Party to the Democratic Party in late 2018, citing growing dismay with the direction of the GOP, and has still earned the support of many of her former Republican colleagues. Thus, despite the slight polling shift in favor of Marshall, analysts expect this to remain a tight and competitive race until the end. 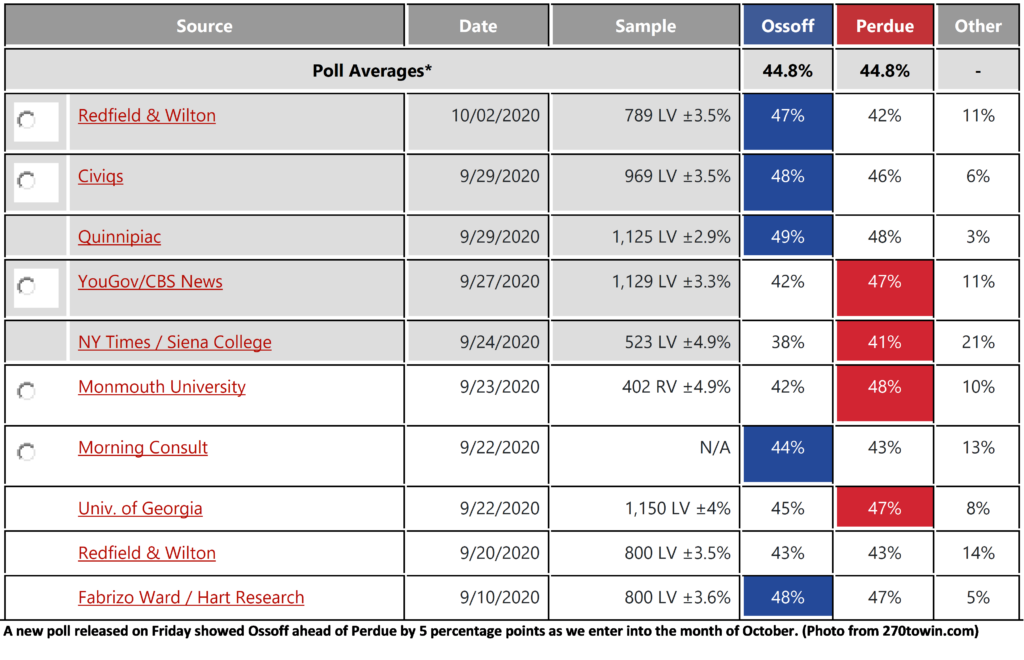 In one of the latest developments in the Georgia Senate race between Republican incumbent David Perdue and Democratic challenger Jon Ossoff, a new poll released on Friday shows Ossoff ahead by five percentage points, 47%-42%. The poll averages from the most recent surveys have the two candidates locked in a dead heat with each other at 44.8%. The extremely competitive nature of the race is further demonstrated by the balance of poll results over the past two weeks – with some showing Ossoff ahead by 1-5 percentage points and others showing Perdue in front by 2-6 percentage points. In the state’s other Senate race, featuring a 4-candidate special election, Raphael Warnock has edged ahead of his competitors in the polls. Warnock, a Democrat, is leading incumbent Kelly Loeffler and current Republican Congressman Doug Collins according to the most recent polls. Loeffler was appointed to the seat after former Senator Johnny Isakson resigned for health reasons midway through his term. Under the rules of the special election, if no candidate receives more than 50% of the vote, then a run-off election will be held between the top two vote-getters. This scenario appears highly likely, as the latest poll from Hart Research shows Warnock in the lead with 26%, Loeffler trailing him with 25%, and Doug Collins in third place with 16%. Other polls, such as one from Quinnipiac University, show Warnock with a larger lead, but still well under the 50% threshold required. The race is currently rated by the Cook Political Report as “leaning Republican,” but Warnock’s rapid ascent in the polls indicates a threat to Loeffler if a run-off is needed. Additionally, with the run-off not scheduled until early January, it is feasible that a scenario occurs where the partisan majority in the Senate is decided by this race. 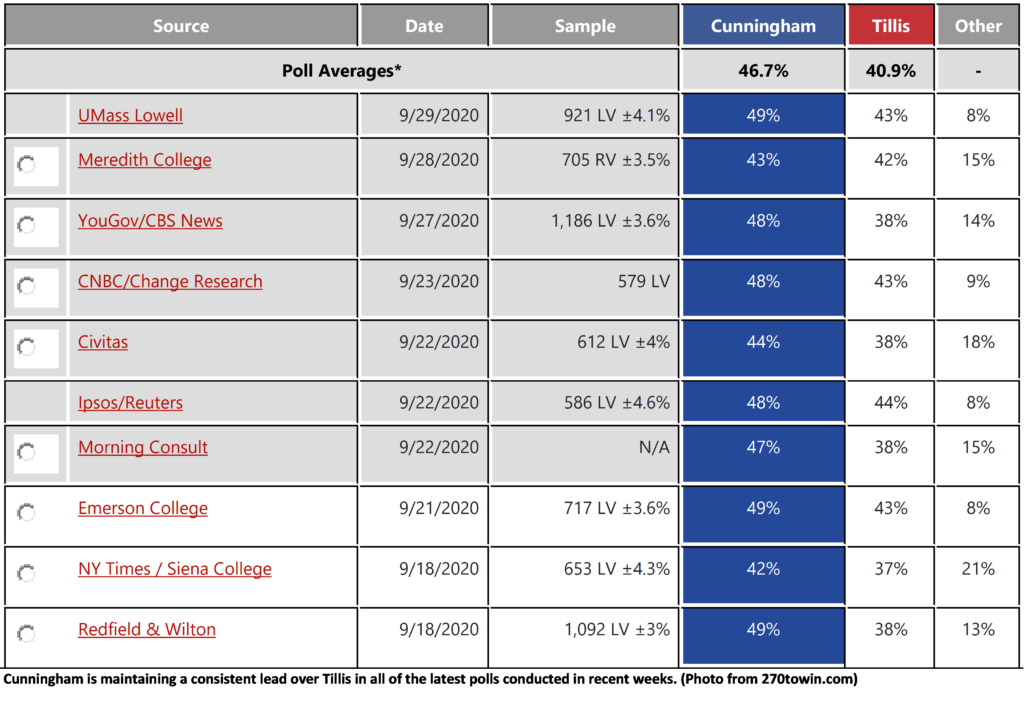 In the latest developments surrounding North Carolina’s Senate race, Democrat Cal Cunningham has jumped out to a commanding lead over incumbent Republican Thom Tillis. Cunningham’s lead currently stands between four and thirteen points, depending on the poll. Tillis has served in the Senate since winning his election in 2014, but most recently made headlines when he was diagnosed with COVID-19 and entered a period of quarantine after participating in a debate with Cunningham. The nonpartisan Cook Political Report currently has the race rated as a “toss-up” despite Cunningham’s strong performance in recent polls. Despite this favorable polling, Cunningham could see his campaign derailed by leaked text messages that surfaced last week on Thursday. In the messages, Cunningham exchanged explicit texts with a woman who was not his wife. Cunningham has apologized for his behavior, but there has been no new polling since the messages were leaked to gauge public reaction. North Carolina is a key target for Democrats aiming to wrest the Senate majority back from Republicans, and while Cunningham has been a strong candidate, the Democratic leadership will be hopeful his stumble doesn’t cost them in November. 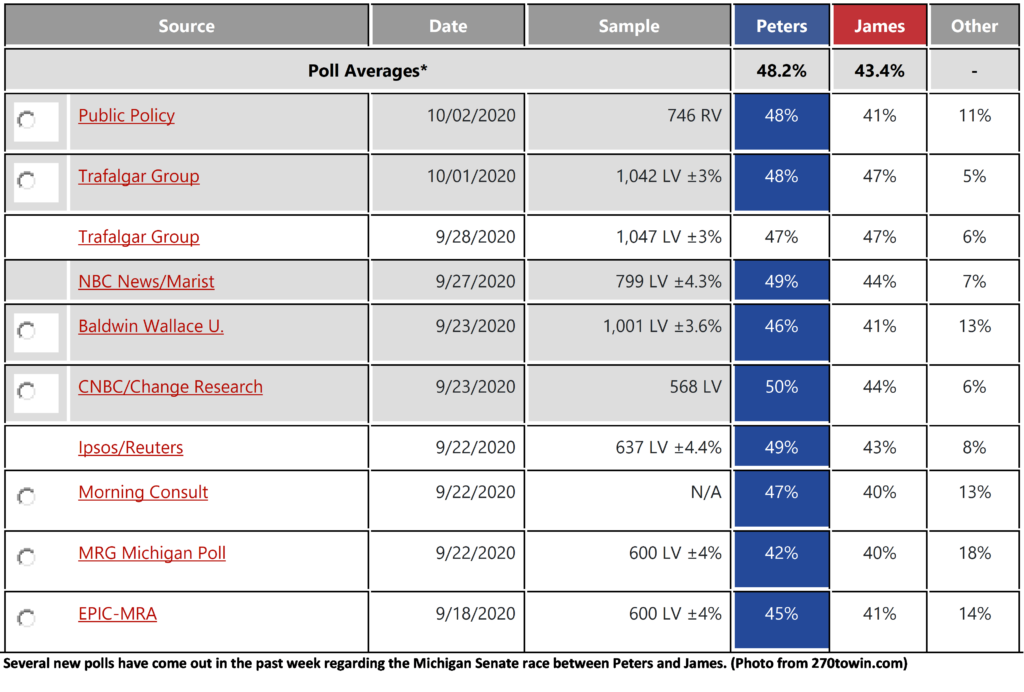 In the Michigan Senate race between Democratic incumbent Gary Peters and Republican challenger John James, three new polls have been released over the past week. Two Trafalgar Group surveys show a near dead heat, with the candidates tied in one and Peters holding a minuscule 1-point lead in the other. A third Public Policy poll shows Peters with a larger advantage of 7 percentage points, 48%-41%. Overall, when accounting for all of the most recent figures, the polling averages find that Peters is maintaining a near 5-point edge over James. Also, in another notable development similar to what has transpired in South Carolina and Kansas, the Senate Leadership Fund has decided to infuse $9 million into this Michigan race to support the Republican challenger’s efforts. 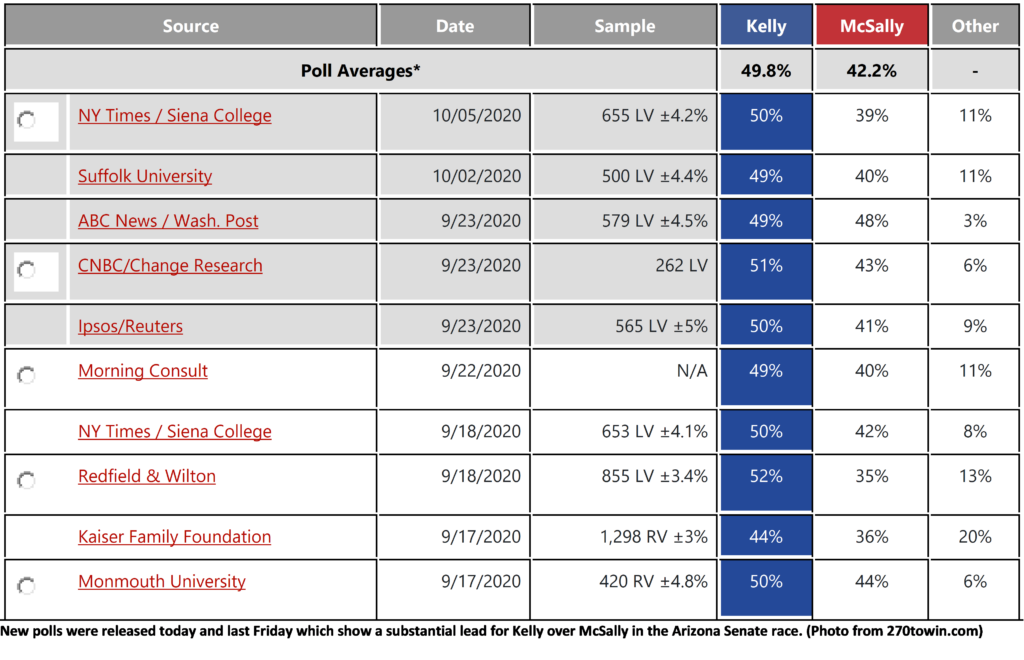 Today, a New York Times/Siena College poll was released that shows Democratic challenger Mark Kelly with a significant 11-point edge over Republican incumbent Martha McSally, 50%-39%. Last Friday, another new Suffolk University poll of likely voters in Arizona found that in the state’s high-profile Senate race, Kelly has a 9-point lead over McSally, 49%-40%. With the exception of an ABC News/Washington Post survey which had the gap between the two candidates at only 1-point, the data from these two latest polls is consistent with most of the recent ones which show Kelly ahead of McSally by anywhere from 6-11 percentage points. In positive news for the McSally camp however, she did receive the endorsement of three former astronauts – Tom Stafford, Charlie Duke, and Jack Lousma – who published an op-ed last week to express their support for her over Kelly. Both political parties have highlighted the importance of this race; for Democrats, it presents one of their best opportunities to flip enough seats to take control of the Senate and for Republicans, holding on to this seat could play a pivotal role in helping them maintain the majority in the upper chamber of Congress. The winner of this election between Kelly and McSally will serve until January 2023 and complete the term of the late Senator McCain, who was re-elected in 2016 and passed away in 2018.