Our ‘Election 2020 Weekly Roundup’ takes a look at the latest updates in the presidential race between President Trump and former Vice President Biden, in addition to the key Senate contests from across the country. This week, we examine the notable new developments in the competitive Senate races in South Carolina, Michigan, Georgia, and Colorado. 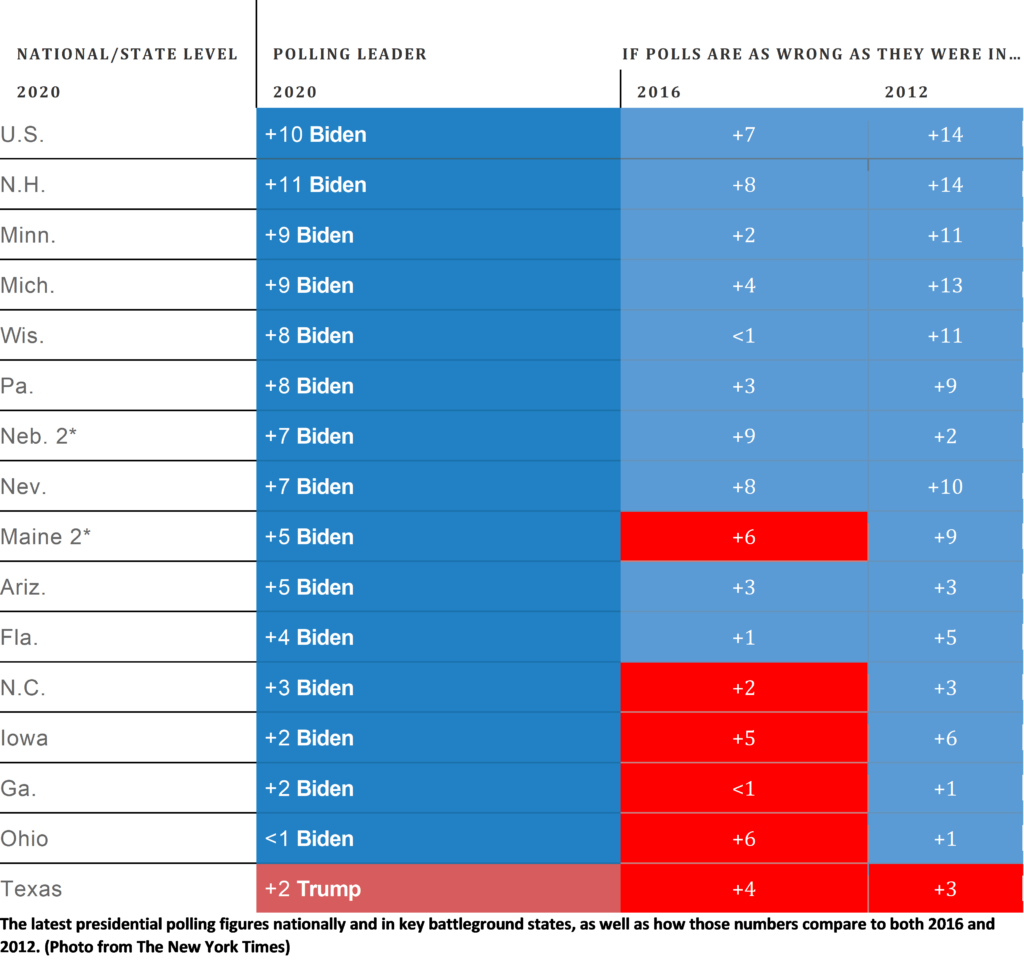 As the election closes to within two weeks away, both presidential candidates have stepped up their campaigning at rallies, speeches, and more. President Trump has been speaking at rallies in vital swing states such as Nevada, Michigan, and Arizona in recent days, all states where he currently trails Democratic nominee Biden. The president has also held rallies in Georgia and Florida, two states that he carried in 2016, but have recently been trending in Biden’s favor according to polls. Former Vice President Biden recently wrapped up a tour of several states, where he held smaller gatherings in order to avoid “super-spreader” events that would infect communities with COVID-19. President Trump has been criticized for his callousness in holding large rallies where efforts to social distance and wear masks are lackluster. Both candidates also took part in competing town hall events late last week, in place of the previously scheduled second presidential debate, that was cancelled after President Trump contracted COVID-19. Those town halls further illuminated the candidates’ different approaches to governance, with the president complaining of being treated unfairly throughout his presidency, and Biden giving long-winded, technical answers to questions on specific policies. The third debate is scheduled for Thursday evening this week, and will be the final chance for voters to see the candidates pitted against each other before Election Day.

In the latest polls, Biden maintains a steady lead, but in a boost to President Trump, Biden’s lead in valuable swing states such as Arizona and Wisconsin have declined in recent days. The newest figures indicate Biden’s advantage in Arizona is at 5 points, down from as many as 11 earlier in the election cycle. Nationally, however, Biden continues to hold a lead of around 10 points. In major battleground states such as Florida, Wisconsin, and Michigan, Biden leads by 4, 8, and 9 respectively. Several experts have noted that without winning Florida in particular, the president will face an exceedingly difficult task to reach the required 270 electoral college votes. Of the key states shown in the above polling image, Biden leads in all with the exception of Texas, where Trump holds a slim advantage. New polling in South Carolina’s Senate race shows incumbent Republican Lindsey Graham with a six-point advantage over Democratic challenger Jaime Harrison. Graham, who is seeking a fourth term in the Senate, is facing the toughest challenge of his career from Harrison, who has broken all fundraising records in South Carolina and raised the most money as a Senate candidate in history. Recently, the race has been shaped by the nomination of Amy Coney Barrett to the Supreme Court, as Graham is the Chairman of the Judiciary Committee and has led the Republican effort to confirm her. In South Carolina, 52% of voters approve of Judge Barrett and support her nomination to the court. This is in contrast to Barrett’s approval ratings in other states, but has been a boost to Senator Graham. Interestingly, support for Graham is not due to distaste for Harrison. In the latest approval polls, Harrison had a favorability rating of 47% and unfavorability rating of 42%. For comparison, Graham’s ratings stand at 49% favorable and 45% favorable. This indicates that both Senate candidates in South Carolina are well-liked, and the election will likely come down to partisan preference. In this regard, Graham would have the edge, as indicated by recent polls, due to South Carolina being a Republican-leaning state.

In Michigan’s tightly-contested Senate race, Republican challenger John James has narrowed his deficit to incumbent Gary Peters to single digits in the weeks preceding the election. James, who declared himself a “non-partisan Republican,” is seeking to oust Peters in a state that President Trump won in 2016. Senator Peters has also tried to distance himself from the partisan games played by Democrats in Washington, using his time on the Michigan airwaves to tout his policy positions instead of party affiliation. Winning split-ticket voters will be key to securing the Senate seat in Michigan, as both James and Peters are specifically targeting voters who vote for the presidential candidate of the opposite party. Senator Peters has enjoyed a healthy lead in the polls for the majority of the campaign, but James’ rapid and sudden ascent has worried national Democrats. Losing a Senate seat in Michigan would be a harsh blow to the Democrats’ chances of regaining the Senate majority. Correspondingly, both Democrats and Republicans have been pouring money into advertising in Michigan, with total spending nearing $30 million. With the election just over two weeks away, the polls indicate that Senator Peters is in a strong position, but Michigan defied most polling in 2016, and James will be hoping for a repeat of that this year. 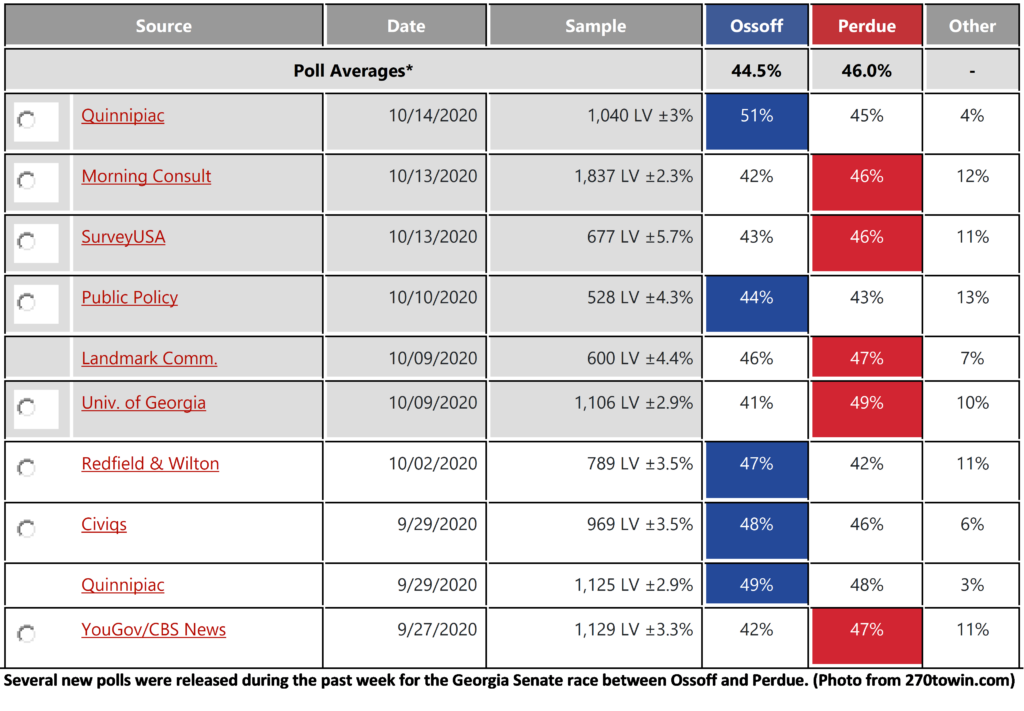 In the Georgia Senate race between incumbent Republican David Perdue and Democratic challenger Jon Ossoff, a few new polls have been released during the past week – with Perdue ahead in two and Ossoff leading in the other. Polls from SurveyUSA and Morning Consult have the incumbent’s lead at 3% and 4% respectively, while the latest survey from Quinnipiac University finds Ossoff up by 6 percentage points, 51% to 45%. When combining the data from these and other recent polls conducted over the last couple of weeks, the poll averages show Perdue holding a slim 1.5% lead on Ossoff overall, 46% to 44.5%. In the preceding days, the race has also witnessed a controversy involving Perdue, where the incumbent mocked the name of Democratic vice-presidential nominee Kamala Harris at a rally for President Trump in Georgia. His actions were quickly criticized, and led to a significant fundraising surge for his rival Ossoff, whose campaign announced had raised nearly $2 million in the aftermath of the incident. The new survey figures in this race over the final two weeks before the election will be worth watching, to see if Ossoff potentially gets a polling boost to go along with the fundraising one. In Georgia’s other special election Senate race, three candidates are vying to permanently fill the seat of Johnny Isakson, who resigned midway through his term and was temporarily replaced by Kelly Loeffler. Loeffler, Georgia GOP Rep. Doug Collins, and Democrat Raphael Warnock are all running for the seat, and the latest polls indicate Warnock is in the lead, with Loeffler and Collins splitting Republican voters. However, under the rules of the special election, the winning candidate needs to secure at least 50% of the vote. If no candidate receives 50%, then a run-off will occur, which would be held in early January 2021. Currently, all the candidates are polling in the 20s, which indicates a run-off is the most likely outcome at this stage. 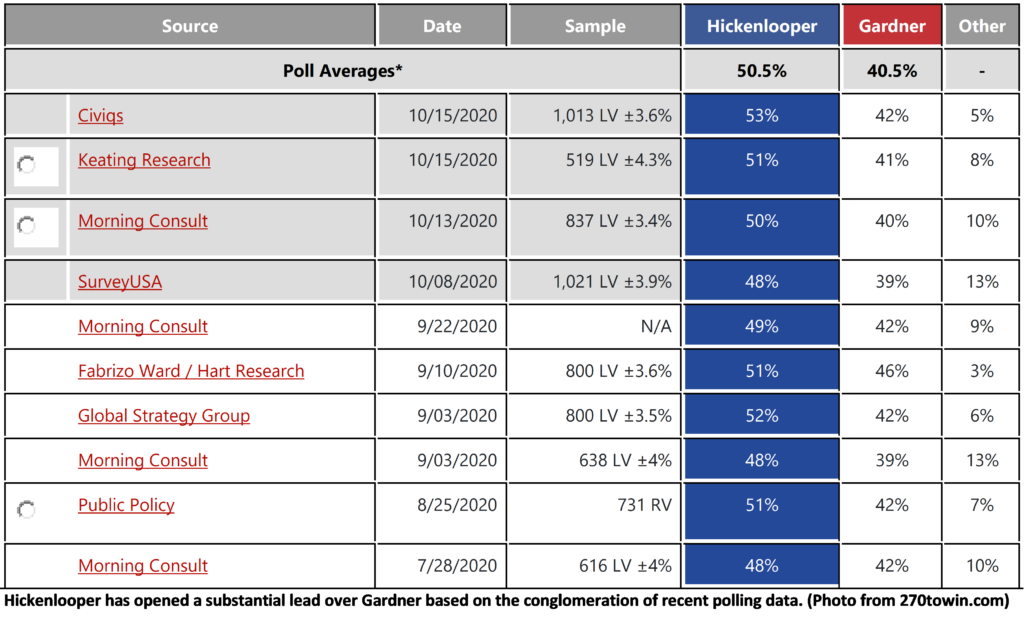 Democratic challenger John Hickenlooper has extended his lead over Republican incumbent Senator Cory Gardner into the double-digits in the Colorado Senate race, as we enter the final two weeks before the election. The poll averages from the latest surveys conducted in recent weeks show the former Colorado governor ahead by 10 percentage points, 50.5% to 40.5%. This includes double-digit margins in three new polls released within the past week, two of which have Hickenlooper up by 10% and the third by 11%. Overall, Gardner has trailed the Democratic nominee in all of the accredited polls in the preceding months, with the average gap growing from the mid-upper single-digits into 10+ territory now. The shrinking odds of Gardner retaining his Senate seat have prompted some national Republican groups to scale back spending in Colorado and focus instead on supporting GOP candidates in other battleground states who are in a better position in their respective races than he is. The National Republican Senatorial Committee, for example, spent only $145,000 in Colorado during the first half of October – far less than in other states like Iowa, Michigan, and Maine, where they have injected between $2 million and $3.5 million in each of those locations. Democrats appear poised to flip this Colorado Senate seat, as they aim to retake control of the upper chamber of Congress next month in November.