Our ‘Election 2020 Weekly Roundup’ takes a look at the latest updates in the presidential race between President Trump and former Vice President Biden, in addition to the key competitive Senate contests from across the country. This week, we examine the notable new developments in the tight Senate races in Maine, Iowa, Arizona, and North Carolina. 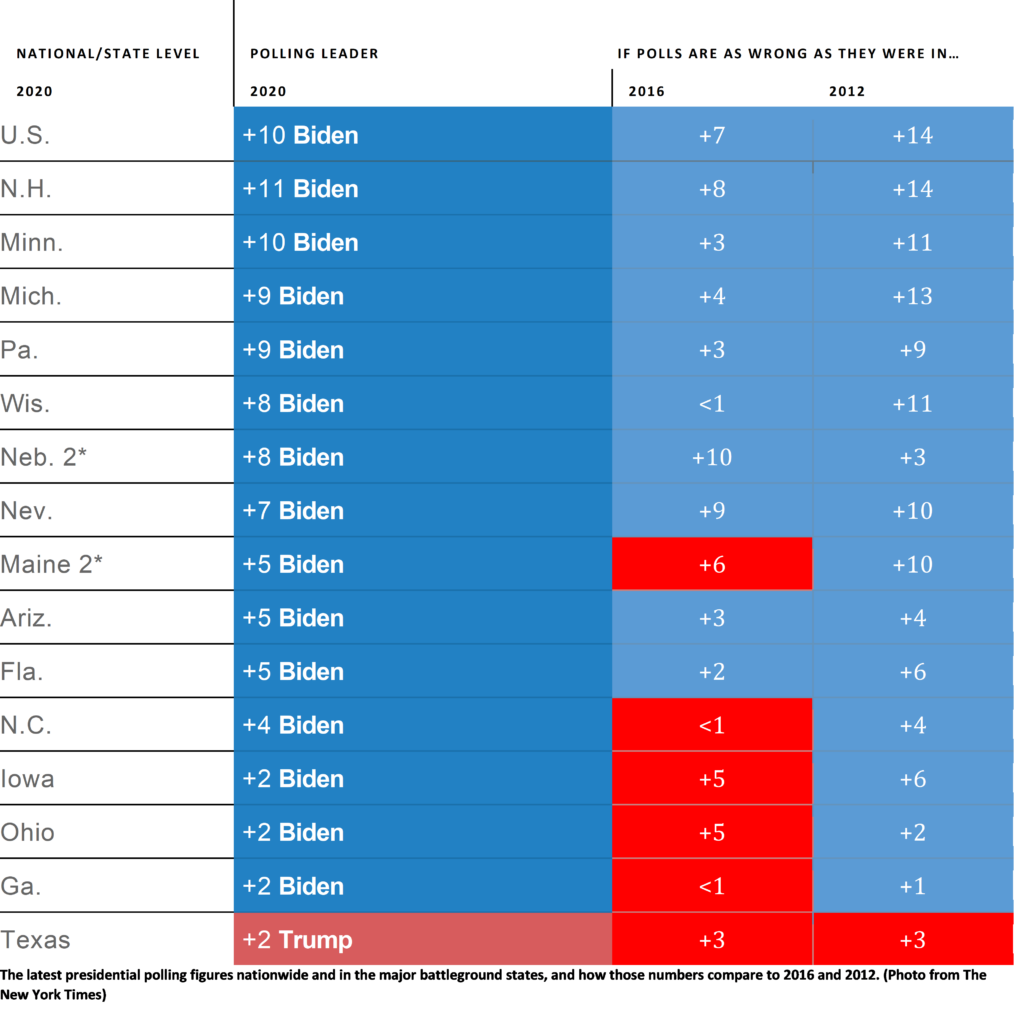 The presidential race this week has been characterized by President Trump’s return to the campaign trail following his contraction of COVID-19. The president held a campaign event over the weekend at the White House aimed at boosting his support among African-Americans and Latinos, two demographics from which Democratic nominee Biden has strong support. President Trump and former Vice President Biden have also been engaged in a dispute over the second and third presidential debates following the president’s COVID-19 contraction. President Trump refused to participate in the second debate virtually, and proposed a rescheduling of the second and third debates, which the Biden campaign rejected. Analysts have noted that the cancellation of the debates would likely help Biden, as he is ahead in the polls. Debates have traditionally helped the candidate who is trailing, and without that boost, President Trump will have to seek other means to overcome the current double-digit lead held by Biden.

In the most recent polls, Biden continues to hold a strong lead over the president. Reputable non-partisan polls from The New York Times, Washington Post, Emerson College, and others all show Biden with a double-digit lead of around 10 points nationally. Biden also maintains the edge in vital swing states like Florida, Ohio, Wisconsin, Michigan, and North Carolina, among others. The former vice president holds a 2-point advantage in Georgia too, while President Trump has that same size lead in Texas. This week, the president plans on travelling to Florida to host campaign rallies in order to boost his support in the crucial battleground state. Without winning Florida, President Trump’s path to the required 270 Electoral College votes is remarkably difficult, particularly when Biden’s advantage in other swing states is taken into account. With just over 3 weeks until Election Day, Trump is running out of time to close the polling margins in multiple key states that are essential for his re-election chances. 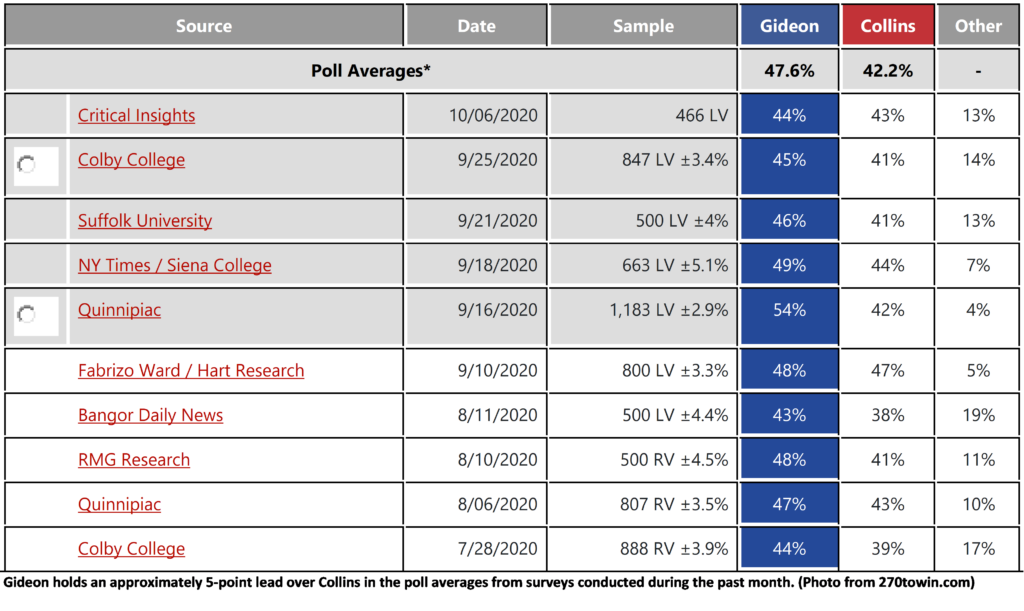 The latest poll released within the past week finds Democratic challenger Sara Gideon holding a narrow 1-point lead over Republican incumbent Susan Collins in the closely-watched Maine Senate race. While this newest survey shows the gap between the two candidates is very tight, Gideon has consistently maintained the edge in all of the polls conducted during the past month, and also led throughout the period before that as well. With respect to the margin of difference, the poll averages from recent data have Gideon ahead of Collins by a bit over 5 percentage points, 47.6% to 42.2%. A few surveys, like the latest one, show Gideon either ahead by a miniscule 1 point or up by 7+ points, but the consistent pattern for the most part when looking at polls from the past couple of months has been her leading by approximately 5 percentage points. The next surveys may give us a good indication of whether the most recent poll is just one of these outliers, or if in fact the race is tightening heading into the final weeks before the election. 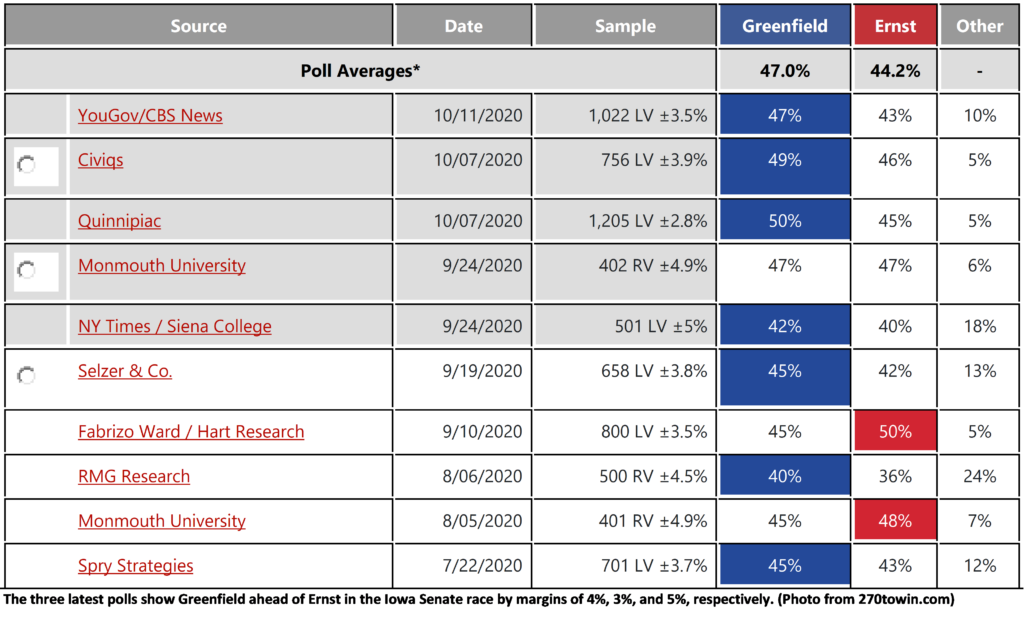 In the Iowa Senate race, the three newest polls from the past week all show Democratic challenger Theresa Greenfield with a lead over Republican incumbent Joni Ernst. A YouGov/CBS News survey found Greenfield ahead by 4 percentage points, 47% to 43%, a Civiqs survey had her lead at 3 percentage points, 49% to 46%, and a Quinnipiac University poll had the Democratic candidate’s edge slightly larger at 5 percentage points, 50% to 45%. This signifies a minor shift in Greenfield’s favor, as the previous polls from late September had the race tied or within 2%. Overall, including these latest ones, the poll averages from the last handful of surveys have Greenfield up by almost 3 percentage points, 47.0% to 44.2%. This is still within the margin of error for all of this recent data; however, the Greenfield camp will be pleased with these figures considering that Ernst held the lead in a couple of polls taken not too long ago in early August and mid-September. Based on the numbers from the last few weeks, the polling trend would seem to indicate that Greenfield has a small advantage over the incumbent at this point in the race. 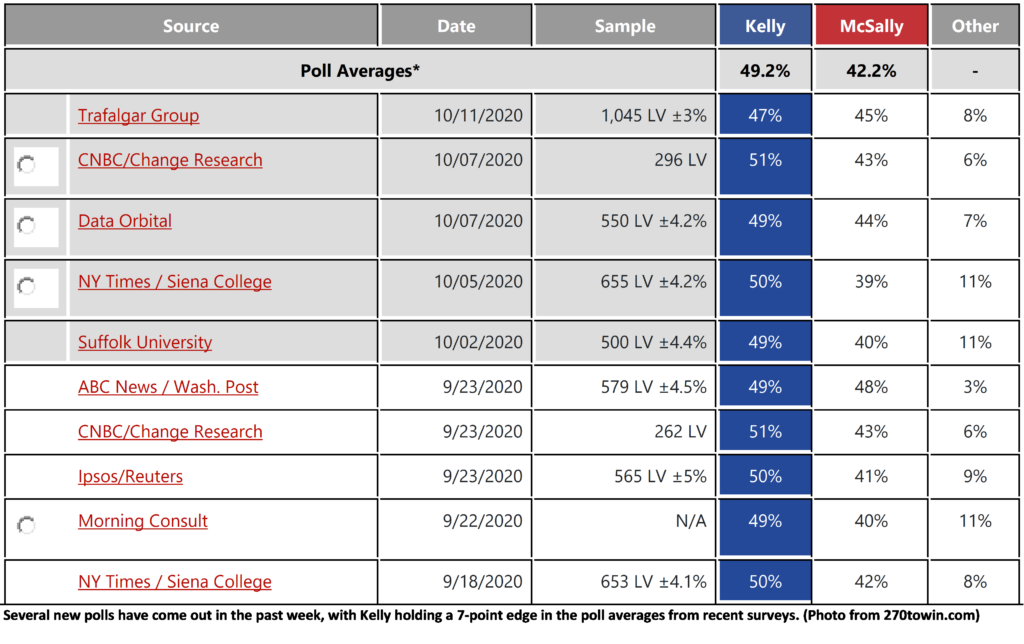 In the preceding weeks, Arizona’s Senate race has turned its focus to President Trump’s influence. Republican incumbent Sen. Martha McSally has been a strong ally of the president, even as he has slipped in Arizona’s polls. Contrasting this, Democratic challenger Mark Kelly is a critic of the president, and has used this to take a commanding lead over McSally. Kelly, a former astronaut, has an average lead of 7 points according to a conglomeration of polls. This includes multiple new surveys released over the past week by CNBC and the Trafalgar Group, among others. In a recent debate between the candidates, McSally hesitated when asked about her support for the president, and dodged the question in an attempt to detach herself from his influence in a state that will almost certainly vote for Democratic presidential nominee Biden in the upcoming presidential election. Kelly’s advantage in the polls is not a new phenomenon in the Arizona Senate race, as he has led McSally since declaring his candidacy. With less than a month until the election, Kelly is in a strong position to defeat McSally and win Arizona’s second Senate seat. 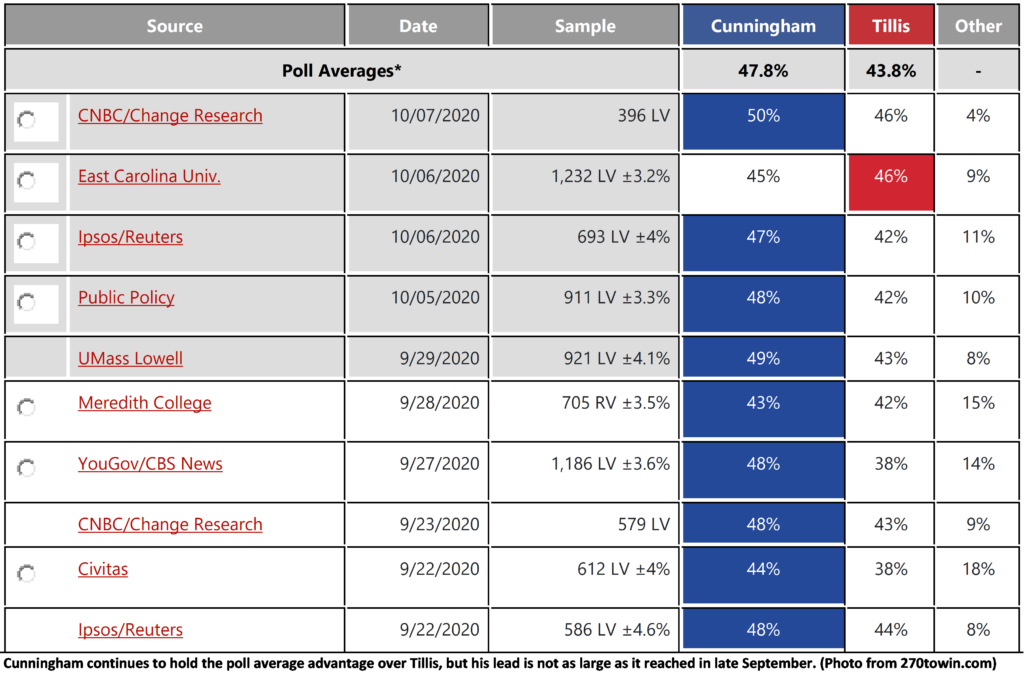 North Carolina’s Senate race has been thrown into turmoil in recent days, as a scandal involving Democrat Cal Cunningham has dominated headlines. Cunningham is challenging Republican incumbent Sen. Thom Tillis, and polls had indicated Cunningham holding a strong lead of up to 11 points. However, the revelation that Cunningham has been involved in an extramarital affair with the wife of a veteran has threatened to derail his lead. The latest polling has shown that the news has hurt Cunningham, but he is still leading Tillis. Whereas Cunningham’s lead was up to double-digit margins a few weeks ago, most polls now show Tillis within 4 to 6 points. Tillis, however, has also been unable to take full advantage of Cunningham’s recent slip-up due to a contraction of COVID-19. This has prevented him from campaigning over the last week, but he has taken out a plethora of negative ads against Cunningham, slamming him for the affair. With the election only a few weeks away, it remains to be seen whether or not the gap between the two candidates tightens even more, but for now, Cunningham maintains a notable polling edge over Tillis.